Who Will Win? We Predict ‘America’s Got Talent’s Season 16 Winner

5 Obnoxious Contestants Who Refused to Leave Talent Show Stages
September 13, 2021
Be the First to Comment 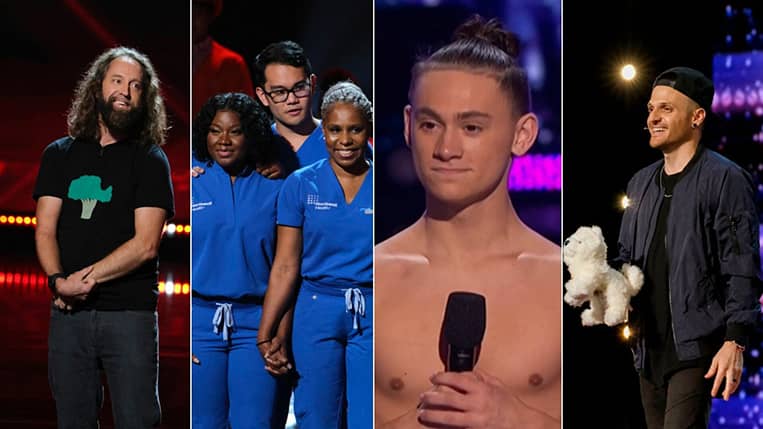 Season 16 of America’s Got Talent has been so unpredictable. Just when we thought certain contestants would dominate the competition, they crumbled in the live shows. Dark horses emerged throughout the season and they now have a real shot at winning the show. Predicting a winner has never been this hard.

Ahead of this week’s AGT finale, here are our rankings for the remaining 10 acts in the competition from the best chance of winning to the worst chance. They are all extremely talented in their own right, but there can only be one winner. Who do you think will win the $1 million prize?

Aside from Nightbirde, Dustin Tavella had the most unforgettable audition this season. Performing an act about the day he adopted his son was incredibly heartwarming. Honestly, he has been flying under the radar with his past two performances. I think he is going to perform his biggest trick yet in the finale. The fact that he is so down to earth is something that America really resonates with. Everybody loves a family man. If he can get his nerves under control, we might be looking at the winner of Season 16.

Aidan Bryant is very humble and is always very appreciative when the judges give him positive feedback. The teen aerialist has Simon Cowell rooting for him all the way. Cowell has mentioned several times that Aidan is a top contender. He has never landed in an Instant Save, which leads me to believe there are a lot of viewers out there voting for him. He doesn’t use any safety nets during his performances which is very bold and dangerous. I think he could be the runner-up if he performs something we have never seen before in the AGT finale.

Northwell Health Nurse Choir obviously are not the best technically trained singers in the AGT finale. They do bring heart to every single performance on the show. I think America loves the story and message of the frontline workers who received Howie Mandel’s Golden Buzzer. It’s really all about impact this season, not about who can sing the highest notes. A choir has never won AGT, but I would be beyond shocked if Northwell Health Nurse Choir did not make it to the Top 3.

There were some points of the competition where I thought Josh Blue had the potential to be the first comedian to win AGT. He has the biggest fanbase on Reddit and YouTube out of all of the contestants. His act in the semifinals did not make me laugh like I was expecting to. It felt rushed, which was not his fault at all. He has strong potential to finish in the Top 5. He would need to really step it up in the finale to make me truly believe that he could win.

Gina Brillon is someone who makes me laugh hysterically. Mandel has praised her for always going out to perform at the same comedy clubs as him. Josh might finish ahead of her just because he won Last Comic Standing and has a little bit more of a fanbase. Gina strikes me as someone that AGT might bring back to perform at results shows in the future, just like Preacher Lawson. I like her personality a lot. I just think she needs to believe in herself a little bit more.

Brooke Simpson is an absolutely incredible singer. Her choice to sing “Bad Habits” in the semifinals was not my favorite. Her quarterfinals performance was the real star of the show. To secure more votes, I think she needs to sing a song that has a deep emotional meaning in the AGT finale. She could make people connect with her a little bit more with a better song choice. I don’t think she needs to win the show in order to be successful. I have an inkling that performing on AGT will lead her to some huge opportunities in the future.

Victory Brinker became the frontrunner once Nightbirde left the competition due to her ongoing cancer battle. She is such an unbelievable opera singer at just 9 years old. Her last live performance was very shaky. I think she is a really talented singer, but with more training, she would be unstoppable. She landed in the Instant Save last week which leads me to believe she will not get enough votes to make the Top 5. She could follow in Jackie Evancho’s footsteps and become a huge star even if she doesn’t win AGT.

I love Lea Kyle and I really do think her quick-change looks are stunning. There were a few little technical difficulties in her last performance that landed her in the Instant Save. She does have a good amount of supporters rooting for her on YouTube and Instagram. Something about the timing of her act seems a little off to me sometimes. I think the changes need to happen even quicker. Production needs to step it up and make sure they do everything they can to ensure her routines go off without a hitch.

Jimmie Herrod is definitely the best technically trained singer in the competition. He did end up in the Instant Save once. Sofia Vergara’s Golden Buzzer picks very unconventional song choices. Song choice is more important than ever before in this competition. Picking the wrong song can really affect your chances of winning. Jimmie’s performances are great, I just think he does get a little overshadowed by some of the other acts because of his song choices.

I appreciate the hustle of World Taekwondo Demonstration Team. What they do takes a lot of skill. I just don’t see this as a Las Vegas act. Sometimes they miss the boards that they are supposed to break in half. Other times their tricks are a little wobbly. They did end up in the Instant Save previously. I don’t think they are on the same level of past acts like V.Unbeatable. This Golden Buzzer act is fun but lacks the wow factor for me.