Talentrecap.com a Talent a America's Got Talent 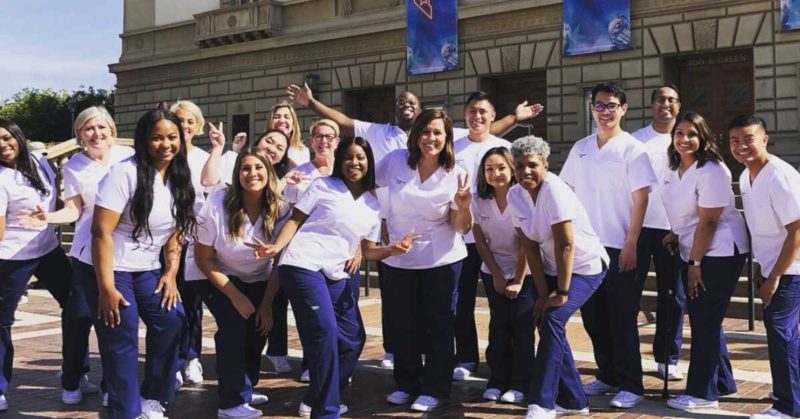 Northwell Health Nurse Choir is a Season 16 America’s Got Talent act that is ready to inspire the world. The group is made up of 18 nurses who came together to find power in their voices. These frontline workers are the true definition of heroes and are one of the acts to keep your eye on ahead of the show’s June 1 premiere.

The members of Northwell Health Nurse Choir did not know each other before coming together to create an unbreakable bond. Northwell Health has over 18,000 nurses, so it was fate that these 18 decided to unite over their shared passion of singing.

Shonda Ramirez, a nurse case manager, was always too shy to pursue singing until joining Northwell Health Nurse Choir. She is featured in one of the first looks ahead of Season 16 and will get very emotional up on stage. Danielle Filippone, a registered nurse, is seen comforting her as they marvel at the opportunity to be on the America’s Got Talent stage.

Danielle uses songs to communicate with her 7-year-old autistic son and he has truly found his voice because of music. This group is full of people with remarkable stories. Orthopedic nurse Sydney Daniel is a former firefighter and Winnie Mele has been a nurse for 41 years.

They Got a Special Shoutout on ‘Jimmy Kimmel Live!’

Actress Julianna Margulies has had a ton of experience playing a nurse on television. She joined Jimmy Kimmel Live! on National Nurses Day to pay tribute to all of the heroes working tirelessly amid the pandemic. When Margulies was walking home in New York City, she spotted Northwell Health Nurse Choir dancing in the street.

Margulies said that the choir was being filmed by a camera crew for NBC. They received a huge applause after performing their dance routine. She ran up to the choir to applaud them and talk about her experiences representing nurses on television for years.

Once Margulies introduced herself, she took pictures with the nurses in celebration of National Nurses Day. Group member Gaelle Clesca wrote on Instagram that the experience was “surreal.” The group is also slated to appear on NBC’s Side By Side: A Celebration of Service on May 27 to honor military and healthcare heroes.


Will They Get a Golden Buzzer?

Throughout the COVID-19 pandemic, Northwell Health staff treated 190,000 patients. This choir managed to find hope through it all. They’re sharing their inspiring message to the world in a performance that we think may be worthy of a Golden Buzzer.

If there’s one thing we know about America’s Got Talent, it’s that Terry Crews loves choirs. He has given his Golden Buzzer to two choirs since he began hosting the show, Voices of Our City Choir and Detroit Youth Choir. Northwell Health Nurse Choir has a pretty good shot of not only earning Crews’s Golden Buzzer, but one of the other judges’ buzzers as well. Anyone would be inspired by their bravery throughout the pandemic. Perhaps they will even earn the show’s first ever group Golden Buzzer.

Northwell Health Nurse Choir did spend time with Crews backstage and got to share their stories with him. It is an honor that it is to have them on the stage and we absolutely cannot wait to see their audition.

SEE ALSO: MEET THE CONTESTANTS SEEN IN THE FIRST ‘AMERICA’S GOT TALENT’ 2021 TRAILER The Rupaul's Drag Race All Stars 6 cast has finally been announced! It feels like…

Prepare to be Mind Blown by The Amazing Shoji, ‘AGT’s Newest Child Magician

‘America’s Got Talent’ Returns with a Stunning Golden Buzzer Act