Who is Queen Cobra? ‘The Masked Singer’ Prediction + Clues Decoded!
January 11, 2021
Be the First to Comment 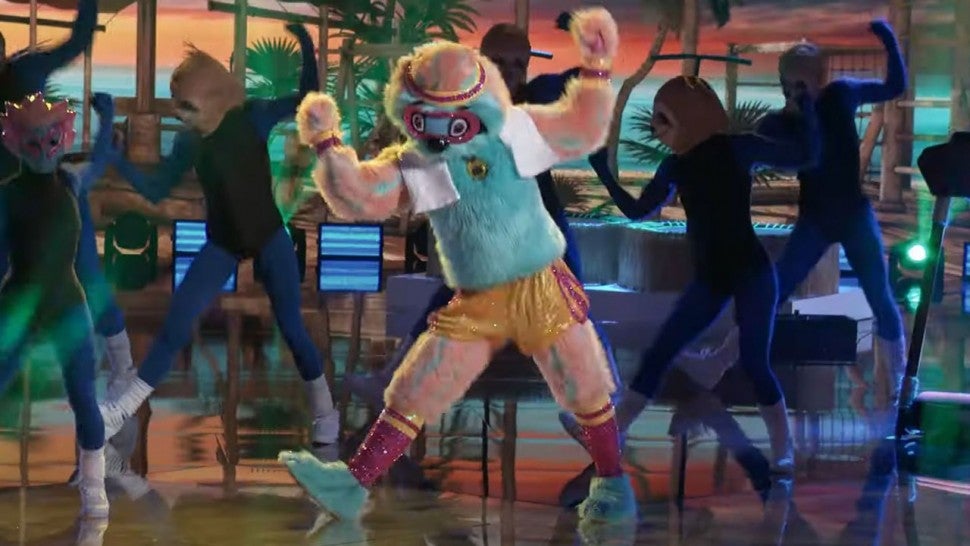 The Masked Dancer has been anything but slow in ramping up the action for season one! It’s the same wild and crazy format we love from The Masked Singer! But you wouldn’t be able to tell that fast pace from the Sloth, though his costume does not match the dancer underneath. This Sloth has energy! And a Russian accent?

But who is under the mask? Our prediction and the decoded clues are below!

The Sloth’s Clues on The Masked Dancer

The Sloth’s clues kicked off with him on a treadmill. He says he “worked hard” to get to where he is today. Women are shown with badges reading “D.R.” When Sloth was a kid, he had a bad accident. We see flasks with a blue liquid being poured into a yellow liquid, making green. He claims kids used to say he was a “Mickey Mouse operation.” Then, Sloth is seen brushing his teeth with “GLEEm” toothpaste. It also has the words “DENTIST WHITENING TOOTH SYSTEM” on the tube. Next, some weird fossil type rock is shown with a mosquito in it. He says he’s here to “inspire a whole new generation to never stop chasing your dreams.” Sloth drinks out of a red Solo cup with “13” written on it. In the final shot of the clues, the room is catching on fire.

The Masked Dancer also has a new twist! Each contestant can say one word in their real, undisguised voice. Sloth’s “Word Up” clue was “Broadway.”

More Clues on The Masked Dancer

Sloth’s second clue package starts with him saying that this is “one of the scariest things” he’s ever done in his life. Just kidding, it’s not hard for “stars” like him! But he didn’t always feel that way. We saw a mirror with people in it holding a baseball bat and ball, a soccer ball, a volleyball, and a football. When he was young, he moved “to a new place with a new language.” A woman is seen holding up a boombox. Eventually, he got a reputation as a “bad boy.” But he took a chance and it worked! “MAXIMUM VELOCITY” flashes on the screen as he’s skydiving. It’s not easy for Sloth to be vulnerable, he says as he’s proposing to a woman holding an “I heart U* diary. Our Prediction for The Masked Dancer Sloth

Even though the Sloth tried to hide their skills, all the clues point to someone with a lot of dance experience. And you may even recognize him from your TV viewing! The Sloth is…

In yet another talent show crossover, we’re seeing one of the pros from Dancing With The Stars on The Masked Dancer! And you love to see it. Here’s how the clues prove our prediction. First of all, that accent in his “Word Up” clue is uncanny. From the clues package, Sloth mentions getting in an accident as a kid and Maks broke his leg in a skiing accident at 13. The blue and yellow liquids in the flasks are a nod to the Ukrainian flag, where Maks was born. Him mentioning Mickey Mouse could be because Dancing With the Stars airs on ABC, a Disney-owned network.

The many “Glee” clues are because he was paired with one of the show’s stars, Heather Morris, on DWTS. The “13” on a SOLO cup is also a nod to one of his former dance partners, Hope Solo, who he competed with on season 13 of the show. Lastly, the “D.R.” could be referring to Denise Richards, or the fact that Maks appeared on three episodes of General Hospital. Finally, the fire at the end and Broadway clue are both references to “Burn the Floor,” which was a Broadway production that Maks starred in.

Maks moved from Ukraine to New York as a kid, explaining his clue about moving somewhere with a different language. We also saw a bunch of people holding sports balls in a mirror, an obvious nod to the Mirrorball Trophy on DWTS. He’s also earned the reputation of the “bad boy” on the show. “Maximum Velocity” was another clue pointing to him, because taking the first three letters of each word hints at his name and his brother’s name. And the proposal clue checks out, as he is married to another DWTS pro, Peta Murgatroyd. Finally, Sloth’s pre-season Instagram clue mentioning the Nutcracker makes sense, because his wife walked down the aisle at their wedding to the “Nutcracker Suite.”