Who is the Avocado? ‘The Masked Singer’ Prediction & Clues!
January 10, 2021
Be the First to Comment 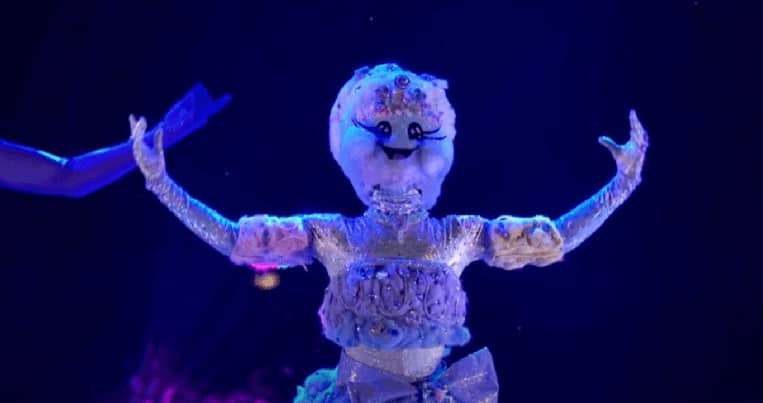 The Masked Dancer kicked off its first season with a crew of talented celebrities dancing in wacky costumes. From animals to flowers to food, it’s been a fun one to watch and try to figure out! But none have been more graceful than Cotton Candy. She came onto the stage in the most unique way yet: literally floating above it on a ring!

So is this someone with dancing experience? And who is under the mask? Our prediction and the decoded clues are below!

The Cotton Candy’s Clues on The Masked Dancer

Cotton Candy’s clues start with her saying she’s “always been a perfectionist.” But things in her life haven’t always been so sweet. We see a bowl of Corn Flakes, then an English Breakfast. Cotton Candy goes on to explain, “growing up, I was kind of an all-around whiz kid.” A wizard hat with moons and stars on it is circled. She says she had big plans, but in order to pursue her dreams, she had to move in with a new family. She got “so homesick” and had trouble “keeping up.” We see a clock at 11:33 with some numbers replaced with the letters “LIFE.”

Cotton Candy lifts weights with a “3” on them while talking about how she never gives up. With her fans’ support, she’s feeling “more glamorous than ever.” Cupcakes with eyelashes and big red lips on them are circled. We then see a bird-shaped cloud with “B!RD” written on it. To close out the clues, Cotton Candy claims “nothing can stop her from being at the top.”

The Masked Dancer also has a new twist! Each contestant can say one word in their real, undisguised voice. Cotton Candy’s “Word Up” clue was “primetime.” Her second set of clues started with her talking about her “scary fall.” But then “The Cotton Candy Story” book appears on screen and flips to chapter one. Cotton Candy says she’s used to setbacks because it was so hard to “balance practice with everything else” in her life. We see a scale with four chocolate bars on one end making an X and two on the other making an 11.

Cotton Candy says she felt “iced out” from other people her age. She missed out on “so many milestones,” even her high school prom. It made her want to “scream” sometimes. She is seen leaning on lipstick while other women dance around her. But all these years later, she’s “grateful for those sacrifices.” An owl with an American flag pin is displayed. Last, Cotton Candy holds up a peace sign with her fingers, which is circled in the clues.

The panelists have guessed that Cotton Candy is Jenna Dewan, Pink, Selena Gomez, and Julianne Hough. Many fans online also agree with the Julianne Hough and Pink guesses. Others have mentioned it possibly being Simone Biles, Gabby Douglas, or Emma Watson.

Our Prediction for The Masked Dancer Cotton Candy

Clearly this is someone with a lot of grace. Knowing a lot of guesses are leaning toward professional dancers, our search definitely took us close to that direction. But in the end, we are predicting that Cotton Candy is not a dancer! Instead, she is…

She’s not a dancer, but she definitely has a lot of the same skills from her gymnastics background! And here are how the clues line up. First, the Corn Flakes are a nod to the cereal box she and the Fierce Five once appeared on. The English Breakfast that followed refer to her first Olympics in London. She mentioned she was an “all-around” whiz kid, again mentioning her gymnastics background.

Cotton Candy mentioned moving away to live with another family and getting homesick in her clues. Gabby Douglas did just that when she was training with a new coach in Des Moines growing up. The clock had “LIFE” on it, a hint at her Lifetime biopic film. We also saw a “3” on weights and Gabby has won 3 Olympic gold medals (paired with our prediction for the Zebra, that makes the 4 gold medals for the group)! The lips on cupcakes are another dead giveaway. Gabby Douglas has a lipstick collab with Beauty Bakerie, which was again referenced when she leaned on lipstick in later clues.

Cotton Candy gave away that she was a gymnast when she emphasized practicing “balance” in her clues, a nod to the balance beam. The American flag pin was a reference to her being part of Team US in two Olympics, represented by her peace sign. And the scale with four chocolate bars in an “X” and two straight make a “12” in Roman numerals. The first Olympics Gabby competed in were in 2012. Finally, the Instagram clue about taking a Christmas vacation on the ocean is explained by the fact that Gabby spent Christmas in 2012 on a Caribbean cruise.