Chrissy Teigen Does Her First Shabbat And Her Jewish Fans Are Kvelling!

5 Obnoxious Contestants Who Refused to Leave Talent Show Stages
January 17, 2021
Be the First to Comment 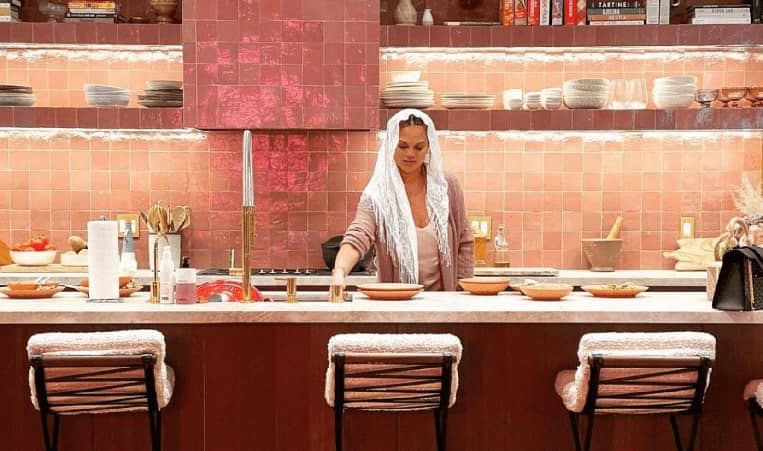 Chrissy Teigen is always making us jealous when she posts pictures of her delicious meals. This time Chrissy cooked her first Shabbat dinner for her family on Friday. She celebrated the Jewish holy day with a delicious menu of items and even shared some photos with her followers on social media.

Chrissy posted on both Instagram and Twitter about cooking her first Shabbat meal. “With my perfect friends and the perfect menu and the help of perfect people like @adeenasussman, @doctorberlin and @dralyssadberlin! I am one lucky bubbie (ok I’m not a grandmother yet but the word is just *chefs kiss* perfect)” she wrote.

On the menu for the night was chicken soup, kugel, chicken, challah and Trader Joe’s chocolate babka. The mom of two shared a video standing by the stove with her head covered as she smiled with a pot of food. Her husband, The Voice coach John Legend can be heard in the background laughing with their guests. Chrissy also had her Twitter followers salivating with a picture of a chicken dish.

Many of Chrissy’s fans began asking about the jewels that she wore on her face and the covering on her head. “My large diamond-shaped crystal is not a bindi, I have crystals around my eyes too and the ‘thing’ on my head would have been worn by my *Jewish* grandmother. Thank you” she wrote on Twitter.

She Previously Celebrated Hanukkah For The First Time

In December of 2020, Chrissy celebrated Hanukkah for the first time ever. Chrissy’s longtime cookbook collaborator Adeena Sussman, who is Jewish, was seen in an Instagram video cooking potato latkes. Chrissy and John also lit the menorah and played dreidel with their children. Chrissy and Adeena have collaborated together on both of her successful Cravings cookbooks and are working on a third. The pair are very close and always seen together posting videos in the kitchen.

“So wonderful to spend my first Hanukkah with @adeenasussman. We had the most beautiful night full of gut laughing, 1000 hour brisket and latkes both eaten and ubered around the city (@jenatkinhair and @mrmikerosenthal are they not PERFECT???) – applesauce is my new jam (HAHA get it) and I successfully memorized all the sides of the dreidel – especially shin” she captioned the Instagram post. “And we got to FaceTime dad in! Man. Just a beautiful night. Thank you thank you @adeenasussman – I will never forget this. Dedicated to my grandmother, Ruth Schaefer! Xx” Chrissy added.

Chrissy’s fans are now left wondering if the model is Jewish. In her Hanukkah post on Instagram, Chrissy mentioned her grandmother Ruth Schaefer. Historically, this name is a German and an Ashkenazi Jewish name according to Kveller. Chrissy’s great grandparents were both German. Chrissy’s great grandmother’s maiden name was Heller, a common name among German Jews.

SEE ALSO: 3 MONTHS AFTER LOSING HER BABY CHRISSY TEIGEN IS FRUSTRATED ABOUT HER PERSISTING BABY BUMP

So, there is definitely a strong possibility that Chrissy has some Jewish roots and will continue to celebrate these occasions with her family, with her own flair of course.