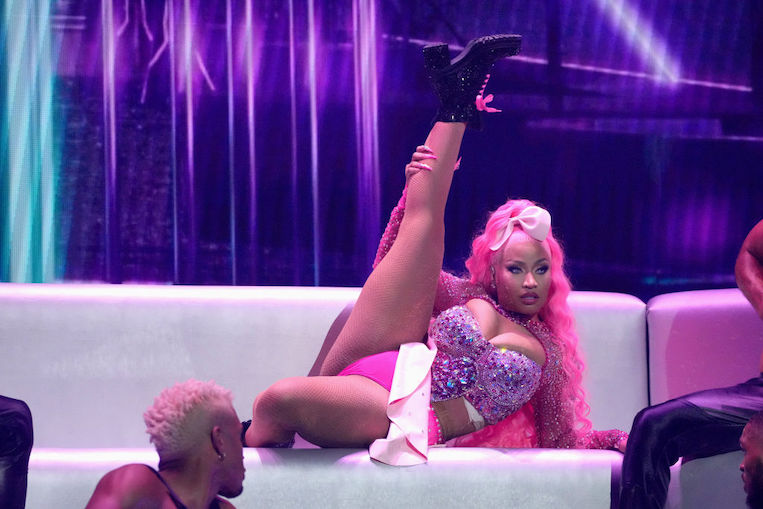 Nicki Minaj has released a new music video for her song “Super Freaky Girl.” As we’ve come to expect from the rapper, the clip is colorful and risqué, with imagery inspired by Barbie dolls. The video even features a Ken character.

The video starts with Minaj’s name, followed by a credit for actor Alexander Ludwig as Ken. The rapper sports pink hair in the clip, along with some vibrant outfits. In one scene, she rocks a bikini covered in a cherry pattern while sitting on the counter in a bright pink kitchen.

In another shot, Minaj poses in a doll box with her name on it, wearing an ’80s-inspired hairdo and holding a guitar like a rock star. It’s an appropriate look, considering “Super Freaky Girl” samples the iconic ’80s tune “Super Freak” by Rick James.

The video also features a dance scene, in which Minaj wears a pink and blue striped dress while backup dancers bust a move around her in their own colorful outfits. Toward the end of the clip, Minaj and her Ken cook on a barbecue grill in their yard.

Despite the bright visuals, there’s a dangerous edge to the music video, as Minaj wields a knife and eventually sets fire to both Ken and their house. But the flames are pink, of course. What else would you expect?

Minaj Just Received the Video Vanguard Award at the VMAs

Minaj was recently the recipient of the Video Vanguard Award at the Video Music Awards, celebrating her entire career. She also happened to co-host the awards show on Sunday night, along with LL Cool J and Jack Harlow.

During the show, Minaj also performed a medley of songs, including “Super Freaky Girl,” “Anaconda,” “Super Bass,” and “Monster.” The rapper once again rocked pink hair during the performance, and at one point she even danced on a pink pole.

Minaj recently shared the trailer for her upcoming six-part documentary series, titled simply Nicki. She explained that the project is still looking for a home for the time being.