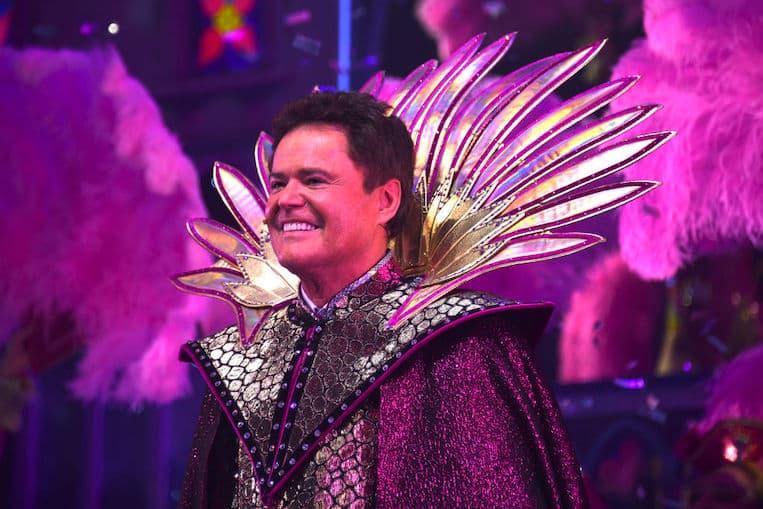 Donny Osmond has confirmed that he’ll be joining the panel on The Masked Singer Season 8 as a guest judge. Osmond competed on the show in Season 1 as Peacock, coming in second place.

Donny Osmond to Appear on The Masked Singer Season 8

“The Peacock is returning to #TheMaskedSinger,” Osmond wrote on Twitter Wednesday, hinting that he’ll be performing “The Greatest Show” before joining the panel with judges Robin Thicke, Jenny McCarthy, Ken Jeong, and Nicole Scherzinger.

Osmond shared his belief that “this is going to be The Greatest Season.” He shared a preview for the new season that teases “more stars than ever before.” Although Osmond doesn’t appear in this preview, he appeared in a previous teaser for the season, performing on stage surrounded by backup dancers.

We know that this season will include an episode themed to Las Vegas, so it’s likely that Osmond will appear then. The legendary singer had a Vegas residency with his sister Marie Osmond for over a decade at the Flamingo Hotel. He’s currently performing a solo residency at Harrah’s.

Season 8 of The Masked Singer will premiere Wednesday, September 21, at 8/7c on FOX. This season will see some format changes, as new costumes will be introduced each week, and there will be two unmaskings per episode.

The show has revealed several new costumes for the season, most recently a character named Harp. Based on the previews, it sounds like this contestant is going to blow the judges away with their talent. We can’t wait to find out more.