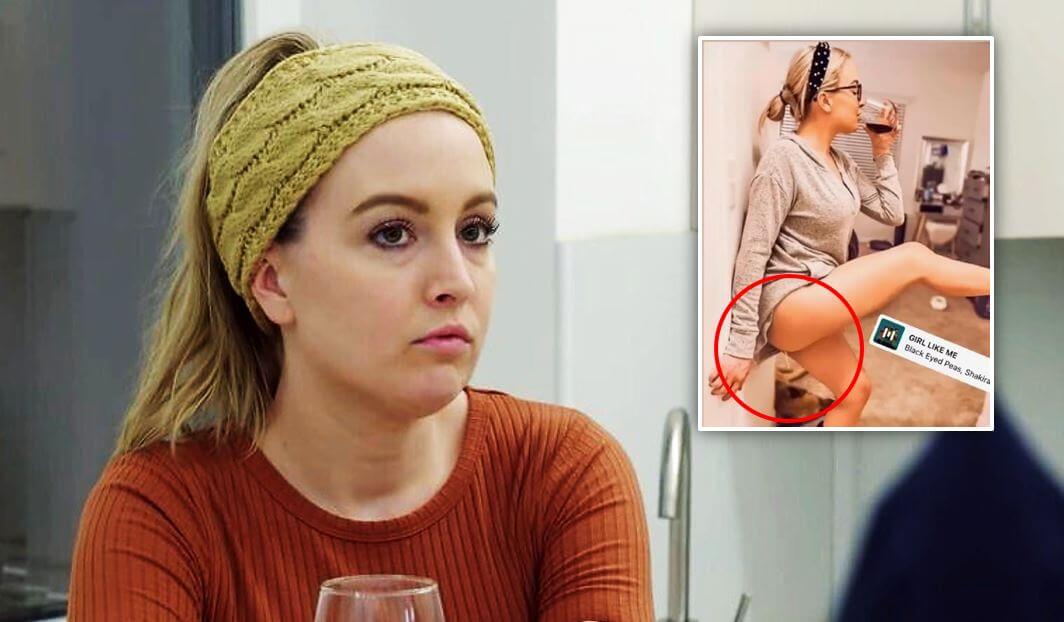 Elizabeth “Libby” Potthast Castravet who appeared on the show 90 Day Fiancé and its spinoff series has caused quite a stir online. Libby posted a photo with an exposed Tampon string on her OnlyFans account. The photo began circulating on social media with many questioning why she posted it in the first place.

Libby, who is a mother to 2-year-old Eleanor Louise Castravet was wearing a grey sweater and no bottoms in the picture. She held a wine glass in one hand and lifted one of her legs up and rested it against the wall. If you look closely, a thin white string can be seen coming out of her rear. This then sent fans spiraling trying to figure out if the photo was real or fake.

On Reddit, someone reposted the photo that has since been taken down from Libby’s Instagram. “There are so many things wrong with this picture! The strange unnatural pose, the ugly messy room, but the visible tampon string…Why would she post it?!” one person commented.

“This is clearly photoshopped, you guys need to learn about how light works,” wrote another. “Has she made any sort of statement about this yet? Or is she just really going to pretend nooobody noticed?” another said. Libby currently charges fans $15.99 per month on OnlyFans, the adult site where people can post explicit content. The 30-year-old currently stars in 90 Day Diaries on Discovery Plus with her family.

Libby From ’90 Day Fiancé’ Responds To The OnlyFans Tampon Photo

After tons of speculation, Libby finally posted a video to clear up everyone’s questions. “I’m gonna say this one time, and one time only. The photo is fake. You can swipe up here, subscribe to my OnlyFans and see the original photo that I posted if you don’t believe me” she said in the Instagram video. Was this all just a money grab?

“Ohhh it was planned so she could swing more people to subscribe” one person commented on a page that reposted the video.

“‘You can swipe up and subscribe to my only fans…’- not a chance in hell girl, nice sales pitch though,” another person wrote. “That was some shameless clickbait” another person agreed.

“The photo on her OF has been doctored by taking the string out of the picture” someone clarified.

Fans of the 90 Day Fiancé franchise know that a lot of the topic of conversation involving Libby and Andrei’s relationship is money. She often relied on her father for money and they even got into many heated discussions about how her Moldovan husband did not have a job. OnlyFans is used as a platform to earn extra cash for many reality stars, so the Tampon picture may have just been a way to generate more of a following.