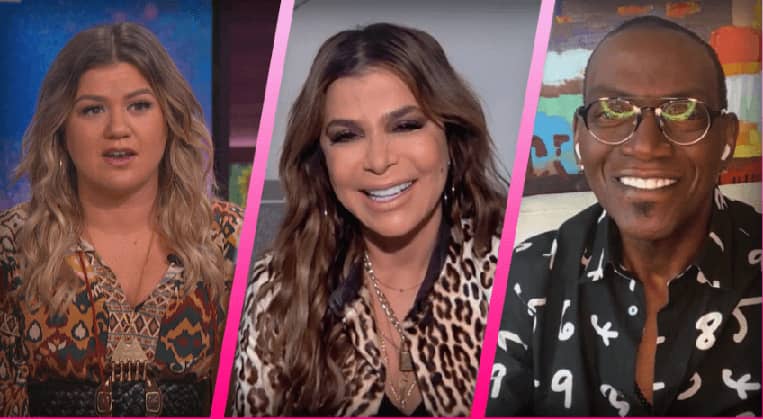 The original American Idol judges Randy Jackson, Paula Abdul and Simon Cowell were the ultimate trio. Randy and Paula’s friendship actually goes well beyond the show and has spanned over 40 years. The pair admitted that they would consider coming back to American Idol under specific conditions. All was revealed when the duo joined Kelly Clarkson virtually on an episode of The Kelly Clarkson Show.

Paula and Randy judged American Idol together for eight seasons of the show. Paula left the show before season nine. Randy served as a judge for 12 seasons of the show and was the longest-serving judge on the panel. He later returned to be a guest mentor. Kelly has known them since she won the first season of American Idol in 2002. The show is about to air its 19th season in February and of course, Kelly had to ask if Paula and Randy would ever go back to the judge’s table.

“I would only do it if Paula and Simon and Seacrest were still there” Randy said. He also said Kelly would have to come and be a part of the show too. This left Kelly reflecting on winning the very first season. “That first season nobody really knew what was going on and it’s so different from other seasons because I came back every season and sang” Kelly said.

“If we all came back together that would be the only way to come back,” Paula said. She joked that Simon would be there with his British accent to bug her. The pair always had a very playful love-hate relationship on the show.

Who Would Paula And Randy Quarantine With If They Had To Choose?

Randy And Paula Revealed How Their Friendship Began Before ‘American Idol’

Kelly asked Randy and Paula how long they have known each other. Paula said that she has known Randy since she was 17 years old. Randy joked that he was 5 years old at the time even though he is older than her.

“I used to teach dance in cheerleading camps and I thought of an idea where we would give the winners who would win the competitions the concerts that were in town and it just so happened to be Journey,” Paula said. “I got all of these cheerleaders who won prizes and awards to come to the show and I took them backstage and we were all in our cheer gear and we met Randy as a bass player.” Randy played bass for Journey in the ’80s and performed on their 1986 album Raised on Radio.

“I was wearing crazy outfits,” Randy said. “You know, you had to at the time. You know how the dawg does it.” Paula also revealed that she lived in a condo with singer Michael Bolton. He ended up babysitting her. “He was the worst babysitter because all he cared about was music,” she said.

“And then Paula and I connected again because when Perry left the band when journey broke up after the last tour that I was on with them, we did a record with Michael Bolton” Randy chimed in. “We did ‘(Sittin’ On) The Dock Of The Bay’ and ‘When A Man Loves A Woman’ and I was in LA. Paula and I hung out with Michael Bolton and Irene Cara. God Paula, we lived some life yo.” Who knew the secret to this long-lasting friendship was a connection to music legend Michael Bolton.

SEE ALSO: PAULA ABDUL TALKS ABOUT THE CHEMISTRY SHE HAD WITH SIMON COWELL DURING ‘AMERICAN IDOL’

Randy is currently the bandleader on Name That Tune while Paula is a judge on The Masked Dancer. She called the show a “blessing” to work on amid the pandemic.