‘The Voice’ Recap: The Knockouts Wrap Up — Who’s Going To The Live Shows? 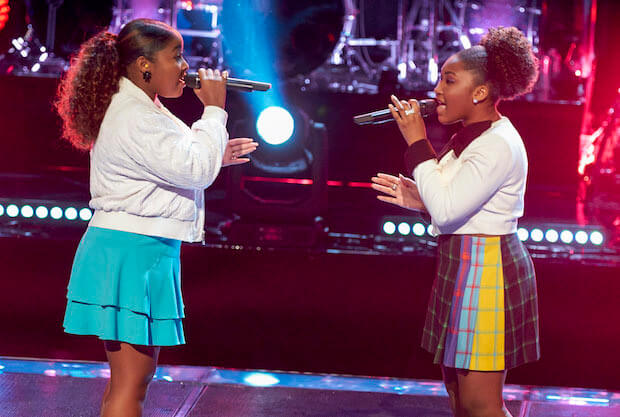 This week on Season 17 of The Voice, the Knockouts wrapped up, with Mega Mentor Taylor Swift returning. The superstar joined coaches Kelly Clarkson, John Legend, Blake Shelton, and Gwen Stefani to help the artists rehearse.

This round decided the final artists who will move on to the live shows, starting with the Playoffs next week. Read on to find out what everyone sang, who the coaches chose to keep, and who got stolen.

‘The Voice’ Knockouts Wrap Up

Gwen said she was pairing these artists together because they’re both “powerhouse” singers. Destiny performed “Tell Me You Love Me” by Demi Lovato, saying she could relate to its “vulnerability.” Rose chose to sing “Big White Room” by Jessie J, which she said she related to working in a prison. Gwen called Rose’s performance “moving” and chose her as the winner.

Kiara chose to sing “The Bones” by Maren Morris, who mentored her thanks to a contest she won. Shane sang “In Case You Didn’t Know” by Brett Young. Kelly pointed out that “they could not be more different.” After the performances, she noted that Shane seemed hesitant on stage, but still chose him as the winner, saying he seemed “more ready.”

Kat chose to sing “Kiss Me” by Sixpence None the Richer, one of her mom’s favorite songs. Lauren performed “Breakaway” by Kelly Clarkson, which she said describes her life. Kelly told her she sang it better than her. Ultimately, Blake chose Kat as the winner of the Knockout. She pointed out that she’ll be delaying college a semester to continue to compete on the show.

Will performed “I Don’t Care” by Ed Sheeran, which he said connected with him as someone on the autism spectrum. Zoe chose to sing “Like I’m Gonna Lose You” by Meghan Trainor and John Legend himself. She sang it in honor of her late godmother. Kelly told John it was “dumb” to put these two together. John said Will has a “fire” and “energy,” and chose him as the winner.

Jake chose to sing a stripped-down version of “Powerful” by Major Lazer. Royce performed “Wake Me Up” by Avicii and Aloe Blacc. Gwen said Jake’s talent moved her to tears, and chose him as the winner of the Knockout. She added that his “vocal ability just shocks you.”

Duo Hello Sunday chose to sing “Almost Is Never Enough” by Ariana Grande, saying they want to “stretch and grow.” It brought Taylor Swift to tears during rehearsals. Alex performed “I’m Not the Only One” by Sam Smith, saying he’s been in relationships where “trust has been broken.” Kelly chose Hello Sunday as the winner, but John chose to steal Alex.

Marybeth chose to sing “All I Ask” by Adele, whose music helped with her stutter as a child. Preston performed “The Way You Look Tonight” by Frank Sinatra, which he said is more his style than his Battle performance. John said they “both stepped up to the plate,” adding that it was his favorite performance of Preston’s. He chose Marybeth as the winner.

Ricky chose to sing “So High” by John Legend, in honor of his boyfriend. Zach performed “The Dance” by Garth Brooks, in an effort to prove himself as a “country guy.” John complimented Ricky’s performance of his song, and Blake said he respected him for taking that risk. He chose Ricky as the winner.

Both of these artists are 16 years old. Damali chose to sing “Sober” by Demi Lovato, in honor of a family member who went through addiction. Gracee sang “Leave the Pieces” by the Wreckers, and had Taylor Swift relating to her style. Kelly compared them to a “young Mariah and young Dixie Chicks.” Kelly chose Damali as the winner, and Blake chose to steal Gracee.

Do you think the coaches made the right decisions this week? Are there any artists you were disappointed to see eliminated? Let us know in the comments.

10 Of The Cutest Shefani Photos EVER