5 Obnoxious Contestants Who Refused to Leave Talent Show Stages
January 10, 2021
Be the First to Comment 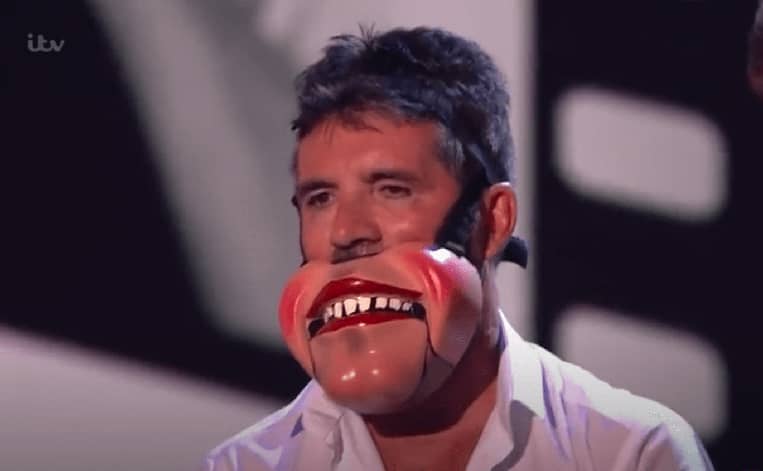 Ventriloquist Jimmy Tamley was able to do the unthinkable on ‘BGT’ in 2019. He made Simon Cowell wear a mouth mask and humiliate himself up on one of the world’s biggest stages. Check out Jimmy’s Semi-Finals performance below that caused Simon to storm off the stage.

Jimmy has had over 50 years of ventriloquism experience so it was no surprise when he first made everyone laugh during his Season 13 audition. He called upon Amanda Holden and David Walliams during his audition to wear the hilarious mouth masks. These masks have a special remote that Jimmy presses to make them move as he voices each of the characters. The judges then act out what he is saying.

Jimmy knew he had to step it up in the Semi-Finals and the only way to do that was to get Simon up on the stage. In this routine, Simon was joined by David who was portraying the role of a ventriloquist. Simon was his puppet. The two wore the mouth masks and David snuggled Simon on stage. Jimmy referred to Simon as “Snuggly Simon.” You could see throughout the performance that Simon felt totally humiliated.

SEE ALSO: SIMON COWELL MADE FUN OF THIS GOSPEL SINGER — WHAT HAPPENS NEXT WILL BLOW YOUR MIND [VIDEO]

When part of Jimmy’s performance required David and Simon to dance, things became super awkward. David was a good sport and began dancing while Simon sat on a stool in embarrassment refusing to dance. Jimmy attempted to move Simon’s legs to get him to dance and this was the last straw. Simon got up and ripped the mouth mask off before storming off the stage.

Jimmy’s ‘BGT’ act wasn’t the only one to humiliate Simon. The longtime talent competition judge has a history of being the subject of acts that completely made him feel embarrassed. Check out the compilation below that features 10 contestants that humiliated Simon on talent shows.

What Happened After Simon Stormed Off The Stage?

The crowd began booing after Simon left the stage. David continued to be a good sport and stayed dancing on the stage. Jimmy was a little frazzled about what to do next but he handled the situation very professionally. He called for Simon to come back out on stage for the last part of the act.

Simon came back out and had his face mask reapplied but the look on his face told us everything we need to know. Jimmy made Simon and David get into a wooden box. He unveiled a shipping label that said the box was shipping to “David’s bedroom.”

After the performance, Alesha Dixon playfully asked why Jimmy couldn’t just use Ant & Dec for this performance. Simon joked that he was going to murder the producers of the show for making him participate in this act. “This will be all that Simon Cowell is ever remembered for,” David remarked.

Jimmy Tamley Accused The Producers Of Sabotaging His ‘BGT’ Act

While Jimmy rolled with the punches up on stage and maintained a positive attitude, he posted a lengthy rant online about how the producers set him up to fail. “I WAS THROWN UNDER THE BUS BY BGT PRODUCERS,” Jimmy wrote on Facebook after his elimination from the show. He said that the producers suggested to make David a ventriloquist during the routine and to make Simon the dummy. Simon was not aware that he was going to be called on stage during this routine.

“In the next 30 minutes after my performance, I was livid at the producers, and told them in no uncertain terms I wanted to leave, and would not go on for the results bit, despite people voting for me” he continued. Jimmy said that the show’s psychologist paid him a visit backstage after the act.

But a source told The Sun that the reason Simon refused to dance during the performance is because of an old skiing injury. “Jimmy grabbed hold of Simon’s knee but, understandably, won’t have realized about Simon’s old injury when he wanted him to do the can-can,” the source said.

It seems even after his ‘BGT’ journey came to an end, Jimmy is still practicing ventriloquism and is available for hire at special events.