The Best Moments You Probably Missed on The ‘DWTS’ Season 31 Finale
January 12, 2022
Be the First to Comment 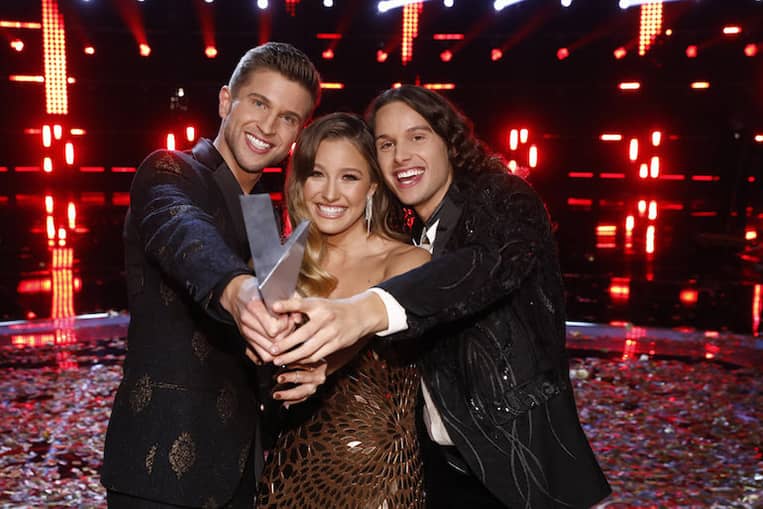 It’s been nearly a month since Girl Named Tom made history as the first group to win The Voice. This sibling group has done as much as they can since winning the series and is now reflecting on the show as a whole.

The season 21 winners shared a photo carousel of them with both Kelly Clarkson and Ariana Grande backstage. Even though these photos and videos were taken behind the scenes before their historial win, the siblings were seen grinning ear to ear.

“Tonight as we look back, one moment that stands out is this: we were on commercial break, standing in a circle with Kelly and Ariana. They were glowing about our success on the charts & encouraged us to keep working hard, get our music out there & use The Voice as a stepping stone, not a destination,” Girl Named Tom wrote. “They expressed that we have what it takes to make it… but it’s never gonna be a cake walk. It was so cool to talk off-camera with these two icons (I mean talk about experience!!) & we won’t forget it!”

They finished off their message filled with gratitude by thanking their fanbase for sticking by their side since the show concluded. On top of sharing these behind the scenes photos, they shared a video of their knockout round performance. In this round of the competition, Girl Named Tom sang “Wichita Lineman” by Glen Campbell against Holly Forbes.

“Just remembering the moment in our hotel room when we first came up with those overlapping lines to crescendo at the end….” Many fans of the trio note this performance as the one that brought this group above the other singers.

What Has Girl Named Tom Been Up To Since Winning The Voice?

This trio has truly done everything they can since winning the series and they’ve made it obvious that they’re still hard at work following the win. On December 14, 2021, Girl Named Tom was announced as the winner of The Voice season 21. Since winning the series, the trio announced that they would be departing Los Angeles quickly given their father’s medical state. Their dad, Chris Liechty, was diagnosed with a rare type of cancer in 2017. The siblings shared that he “is in horrific pain following another surgery” in their social media announcement.

The trio made it back to Pettisville, Ohio the day after their win and released their first song with their new label. Along with this song they announced a contestant where fans had the opportunity to win a Christmas present from them. Soon after, the trio shared that they met The Voice winner Cam Anthony before the competition really began for them. They didn’t take them meeting as a sign, but they really should’ve.

The trio has gone on to share their love of their little town on both Instagram and recent interviews. Since returning home, they visited and performed at a school in Pettisville. They also recently talked about how much their small town’s support meant to them on a recent episode of The Ellen Degeneres Show. Although they mentioned their father’s recent time in the hospital on the show, they did not provide an update on his health.

While on this talk show, Girl Named Tom shared that they have an album in the works. The group is hoping to tour around the country once again in 2023.