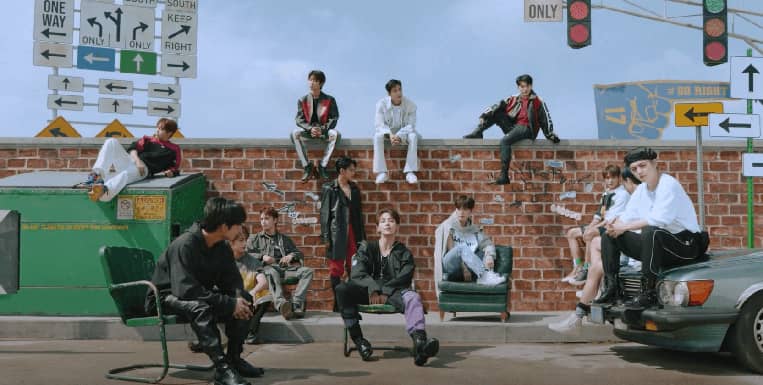 South Korean boyband Seventeen just performed their smash hit “Left & Right” on an exciting episode of The Kelly Clarkson Show. Fans are in love with this performance that showcased every group member of this exciting group. Check out their performance below.

The group showed off their synchronization and awesome dancing skills during this performance. Twitter went wild prior to the performance as fans patiently waited for this big moment. They started off doing choreography in an office dressed as businessmen. The lights began flashing as Seventeen completely slayed the routine. Signs for The Kelly Clarkson Show were posted all around the office. They struck a pose at the end and the fans went wild after thousands tuned in to watch it live.

Seventeen has 13 members: S.Coups, Wonwoo, Mingyu, Vernon, Jeonghan, Joshua, Woozi, DK, Seungkwan, Jun, Hoshi, The8, and Dino. The group is split into three sub-units where each member is able to show off their skills. They focus in the areas of hip-hop, vocals and performance. Each group member is very involved in each aspect of every performance, song and music video.

SEE ALSO: WHY IS BTS SO SUCCESSFUL IN AMERICA? FINALLY EXPLAINED

They previously performed their song “Home;Run” on The Late Late Show with James Corden. It is the lead single from their album Semicolon which was released last year. The group embarked on a worldwide tour but were forced to cancel their remaining shows at the beginning of the coronavirus pandemic. Seventeen’s seventh EP called Heng:garae ranks third in all-time weekly album sales in South Korea, behind BTS’ Map of the Soul: 7 and Map of the Soul: Persona.

The Group Has An Upcoming Online Concert

Seventeen is preparing for a highly anticipated online concert called “IN-COMPLETE.” Fans cannot wait for this concert. “SEVENTEEN will be performing more than 20 songs, presenting top-notch performances for their global audience” according to a press release. “Viewers will be able to enjoy the virtual concert in four multi-view screens that consist of a main display and conceptual ones.” The live stream will be on Jan. 23 at 1 a.m. PST, 4 a.m. EST, and 6 p.m. KST. Tickets are KRW 49,500 (USD 45.72) for HD single view and KRW 54,500 (USD 50.34) for HD multi-view.

The group has already been off to a hot start in 2021 as they have performed on two major talk shows and the Grammy’s Mini Masterclass Experience. They are seriously taking over the world with their music, one show at a time.

What did you think of Seventeen’s epic performance on The Kelly Clarkson Show?