Who is the Avocado? ‘The Masked Singer’ Prediction & Clues!

Who is the Avocado? ‘The Masked Singer’ Prediction & Clues!
November 16, 2022
Be the First to Comment 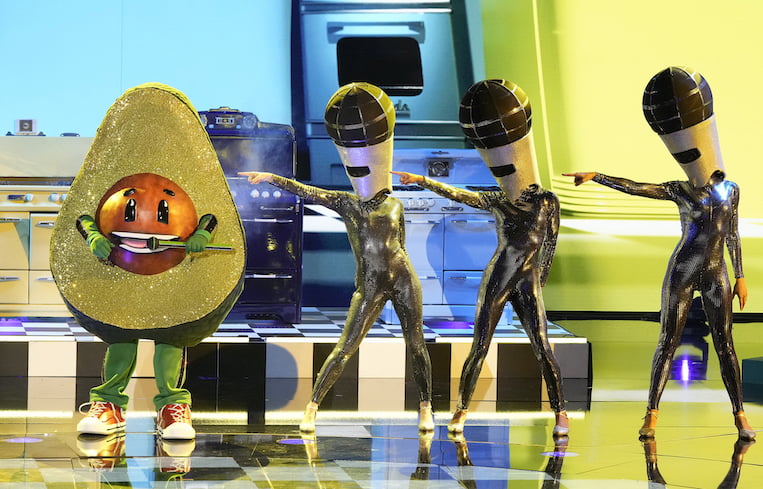 On this season of The Masked Singer, a new format unmasks TWO celebrities every night! And with 22 celebrities total, that means more huge stars and more shocking reveals than any season before.

With a history of food-related costumes, the Avocado is definitely one of the cutest! And they shine like gold…literally because the entire front of the costume is covered in glitter! But who could be the celebrity under the mask?

We got exactly one clue about the Avocado from The Masked Singer before the season started and that was an Instagram post. An x-ray reveals chips underneath the costume. But could this mean the celebrity is a chef, or someone known for playing poker?

Well on Comedy Roast Night, there were plenty of clues to decode! Taking the stage, we got the clue that Avocado is a “dude’s dude.” He started his clues by saying “sure I’m a funny guy now, but I’m light years away from where I started” while holding a cocktail with an umbrella in it. A bald eagle crashes into a window next to him. Avocado claims that he used to be an “average joe working in construction.” But he didn’t want to work outside forever and he really wanted to make people laugh.

Two of the men in black are shown with laughing masks over their faces. On a whim, he met a buddy who helped him turn in his tools for some “sweet sweet AC.” After some success, he wanted to expand his reach, so he “took a risk on a whole new venture…and it became a billion dollar industry.” While saying that, he’s handed a mic and one of the men in black holds headphones up to his ears. He dedicates his performance to Ken Jeong.

Jon Lovitz brought another clue after Avocado’s performance, saying “He’s really into home renovation…Avocado has a face you wanna listen to.”

Nicole predicted the Avocado was either Harrison Ford or Joe Rogan. Jenny also went the podcast route, guessing Marc Maron was under the mask. Robin thought it might be Tim “The Tool Man” Allen, which Jenny backed up.

Based on the clues and performance, the guessing game began online! Many people agreed with Robin that this was Tim Allen. Other popular predictions included Danny DeVito, George Lopez, or Adam Carolla.

Who is the Avocado on The Masked Singer?

After a fierce battle with the Snowstorm, the Avocado was eliminated. And he was revealed to be…