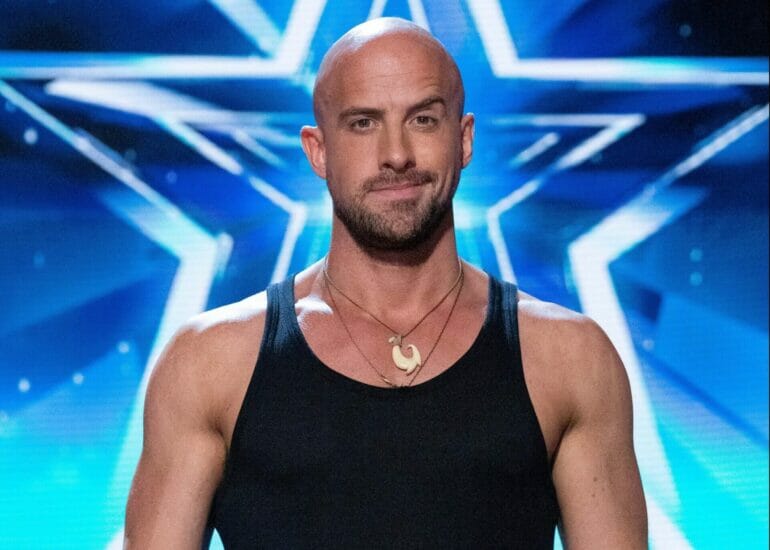 Daredevil Jonathan Goodwin and his fiancée, actress Amanda Abbington, have been updating fans about his condition following a serious accident on the set of America’s Got Talent: Extreme last year. As a result of the accident, Goodwin is now paralyzed from the waist down.

Last October, Goodwin was rehearsing a stunt for AGT: Extreme. Things went wrong, and Goodwin reportely ended up being crushed between two cars suspended in the air before falling to the stage below.

This week, Goodwin posted a photo of himself in a wheelchair with his dog on his lap, sharing that they just reunited a couple of weeks ago. Goodwin wrote, “A lot has changed in the last 6 months, but love is a constant and I’m very very loved. Looking forward to my next chapters and being a roll model.”

He later took to Instagram stories to share that he has a T11 spinal cord injury and is paralyzed from the waist down. He said it was “likely permanent,” adding, “If any of you want to race though, I’m pretty sure I can beat you…”

Goodwin previously shared in February that he was finally out of the hospital after four months, posting a selfie with Abbington and calling her “my love.” The couple got engaged last year, shortly before Goodwin’s accident.

According to People, Abbington shared more details about Goodwin’s injuries in a recent interview on Jay Rayner’s Out to Lunch podcast. She explained that he’s paralyzed and using a wheelchair.

“He fell 30 feet and lost a kidney, broke both shoulder blades, shattered both legs,” the actress shared. “Third-degree burns, broke his spine and severed his spinal cord and nearly died. And then on the operating table, he nearly died again.”

Abbington said of Goodwin’s paralysis, “Unless there’s a kind of stem cell surgery or that thing that Elon Musk is designing with the little chip, he’ll be like that forever.”

She shared that Goodwin has remained “positive and upbeat and so strong,” adding, “His courage and his strength is something that I just aspire to be like.”