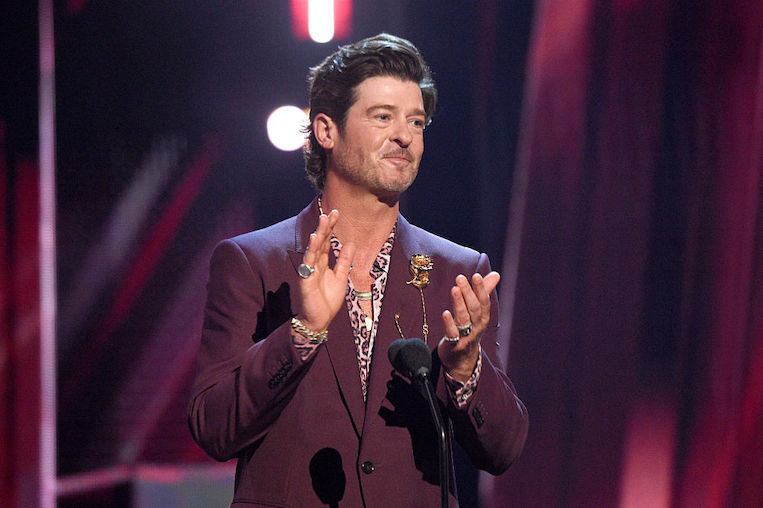 Photo by: Getty Images for iHeartMedia

Robin Thicke is known and loved for his time on The Masked Singer, but what was his career like before the talent series? Here’s a look at his music career, lawsuits, and more.

Robin Thicke was born in 1977 to actress/singer Gloria Loring and actor Alan Thicke. Reportedly, Thicke began writing music with his father. Even though his father helped him learn song structure, he wouldn’t fund a professional demo tape for Robin’s vocal group. While it may seem like his parents were discouraging, Thicke explained that they wanted him to graduate school before pursuing a career in music.

The demo tape eventually was funded by the uncle of one of the members, Al Jarreau. R&B singer Brian McKnight was so impressed with Thicke’s vocals that he became one of Thicke’s first mentors. Eventually, the singer introduced him to Jimmy Iovine, who landed Thicke his first record deal with interscope records.

At the age of 17, Thicke moved out of his parent’s home. The high school senior was earning a living and supporting himself as a professional record producer and songwriter. Reportedly, his parents were leery of the decision at the time. This singer first made a name for himself as a songwriter and music producer for other artists. He wrote for artists like Brandy, 3T, Jordan Knight, Christina Aguilera, and more.

The singer released his debut single “When I Get You Alone” in 2002, which samples “A Fifth of Beethoven” (a disco version of the “Fifth Symphony” by Beethoven). This song became a success when it peaked in the Top 20 in Australia, Belgium, and Italy. It also reached the Top 10 of the singles charts in New Zealand and the Top 3 of the Netherlands.

The next year, Thicke released A Beautiful World, which debuted at number 152 on the Billboard 200 albums chart. Even though the second track from this album was relatively successful, the album itself suffered from a lack of promotion. After A Beautiful World, Thicke hit a stalemate with his record company. Reportedly, the label lost faith in his ability to sell music within the genre.

The singer went on to sign with Star Trek records for his second album, The Evolution of Robin Thicke. Songs on this album gained success quicker than his debut album. During this time, he released his first breakout hit, “Lost Without U.” The singer released his third album, Something Else, in 2008. Seven months after the album’s release, Thicke reportedly was set to release another in 2009.

In late 2009, Thicke release his album Sex Therapy, which was followed by Love After War in 2011. Thicke found immediate success in the R&B/hip hop genres with these releases. During this time, Thicke vowed to show off more of his hip hop side.

The Arrival of “Blurred Lines,” The Controversy Behind it

On March 26, 2013, Thicke released his hit single “Blurred Lines.” Not only was the song a hit, the music video featuring Emily Ratajkowski, Jessi M’Bengue, and Elle Evans earned over a million views in one day. The song won numerous Billboard Music Awards and Soul Train Music awards.

Blurred Lines soon received harsh criticism for being misogynistic and promoting rape culture. Critics called the song’s lyrics “creepy” and “rapey.” Soon after the single’s release, heirs of the singer Marvin Gaye sued Thicke and Williams, stating that the song was plagiarism of Gaye’s tune “Got To Give it Up.” Gaye’s were awarded $7.4 million, but the amount was reduced to $5.3 million with royalties. In October 2021, Ratajkowski revealed in her book that Thicke allegedly groped her breasts without consent. The singer did not publicly respond to the allegations.

Following “Blurred Lines” Thicke released another album, then took time off from the public eye. In 2016 he rejoined the cast of Real Husbands of Hollywood, revealing his personal and professional problems including his divorce, lawsuit, drug use and poorly received album. He began as a panelist on The Masked Singer in 2019.