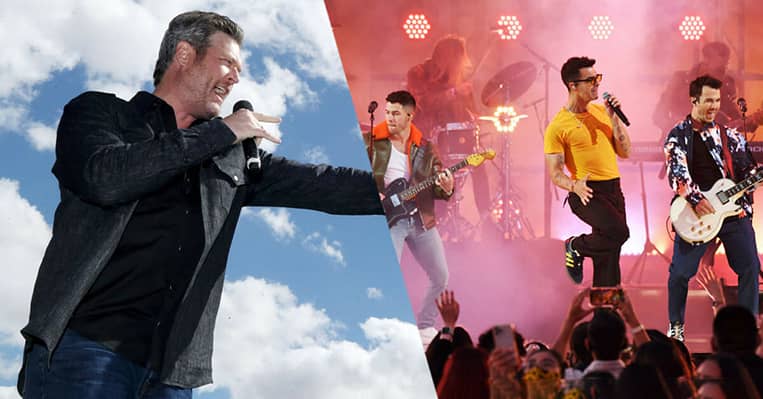 Get fired up for Macy’s 4th of July Fireworks Spectacular on NBC! The annual celebration includes a star-studded line up. Hosting the event is New Amsterdam’s Ryan Eggold and Girls5eva star Renee Elise Goldsberry. The Jonas Brothers, Blake Shelton, and more are set to perform during the event. Don’t miss the two-hour broadcast this Sunday at 8 p.m. on NBC!

This year, the event will honor America’s every day heroes from communities across the country. It will be a display of the resilient spirit within all of us, and after the past year, I’d say we all deserve a little celebration. A series of inspirational stories called the “American Spirit” will spotlight those who work hard everyday to protect and serve their neighbors.

The Jonas Brothers will kick off the festivities by performing their hit single “Leave Before You Love Me” with Marshmello. The music video for “Leave Before You Love Me” has amassed over 10 million views since its premiere. The 4th of July performance will be accompanied by a drone light show, the first of its kind in Macy’s Firework history. 350 drones will in fact light up the sky to honor Team USA in the Tokyo Olympic and Paralympic Games.

Speaking of the Olympics, The Jonas Brothers also performed at the Track and Field trials earlier this month. Our favorite family band debuted “Remember This” on the NBC network and were pumped for fans to hear the track.

The boys shared some witty words with fans in an instagram video:

“You’re going to JUMP off your couch when we debut our performance later this summer. We’re so excited for you to be a part of these moments with us and to hear this new music. And maybe, we’ll change our name to the Javelin Brothers.”

It seems that the world is finally starting to see a glimmer of normalcy. The revival of Macy’s 4th of July Spectacular is just one glimmer of hope that we can all enjoy. The dazzling display of eye popping pyrotechnics will deliver the drama in its highly anticipated return. NBC’s A-list line up, and powerhouse musical performances will light up the stage (along with the actual fireworks of course) in an event you won’t want to miss!