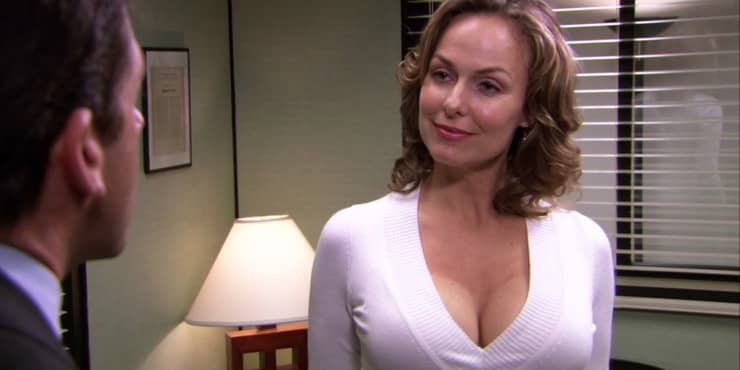 Jan Levinson on The Office was known as Michael Scott’s (Steve Carell) toxic love interest. She was Michael’s supervisor, but always had a tough time keeping it professional. Fans of the series loved the relationship between Michael and Jan, many were pretty sad to see them part ways before the end of the series.

Fans saw a whole new side of Jan and Michael’s relationship during this hilarious episode. The two were at each other’s throats the entire evening and made their guests very uncomfortable as the night went on. This episode includes the most intense version of charades that has ever happened.

In this episode, Michael messes up and sends the entire office a picture of Jan topless. The photo quickly traveled through the Dunder Mifflin office and upper management. Jan said that the Jamaica fling was a one time thing, but now the entire office has proof it happened once again.

Soon after Michael and Jan break up, she comes back from vacation. While on vacation she got a keepsake…breast implants… that she (of course) had to show Michael. The entire office notices just how much Jan has changed since her vacation.

The beginning of Michael and Jan. Their on screen romance really began in this episode in season 2. Michael can’t keep himself contained after finding out that Jan had just gotten divorced. His two-year-old sense of humor is what really makes this business dinner fun, but Jan’s not having it.

Michael gets interviewed on behalf of Jan’s termination after the photo from their vacation went around the entire Dunder Mifflin Office. He admits that he had an on-and-off again relationship to the lawyers, definitely not the way that Jan wanted it to go.

Michael runs into Jan and finds out that she’s pregnant. Poor Michael is in disbelief that she went to a sperm bank over having a child with him. Even though he’s not the dad, Michael still steps into the father role for a time. This episode holds the iconic Michael quote: “You cheated on me? when I specifically asked you not to?”

Catch Melora Hardin tonight as she takes the ballroom for the first time for the Dancing with the Stars season 30 premiere.