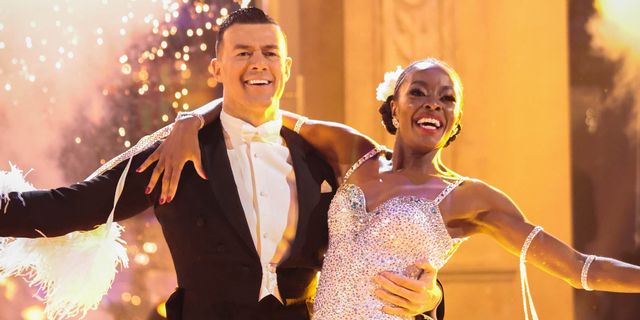 Due to an injury, AJ Odudu and her partner Kai Widdrington have withdrawn from the upcoming Strictly Come Dancing finale. The T.V. presenter tore a ligament in her right ankle. Over the last couple of days AJ used crutches hoping that she was able to heal on time.

Unfortunately, the star decided that she will not be able to perform for the championship for fear of further injuring the ankle. The finale will now see Rose Ayling-Ellis and Giovanni Pernice dance against John Whaite and Johannes Radebe.

AJ shared that she worked hard to try to compete. She has had ultrasounds, MRI scans, X-rays, and had two incisions to drain the inflammation around her ankle. Ultimately, nothing worked for the dancing diva. She described this season of Strictly Come Dancing as an incredible honor. AJ mentioned that she feels gratitude towards her dancing partner, Kai, and over the last 13 weeks she has been having the time of her life.

In a lengthy Tweet, AJ shared that she has done all that she could do in order to perform in the upcoming finale. She said she even asked her doctors if she could perform in her “medical boot.” She continues to keep her high spirit during what I am sure is a tough situation.

AJ said that she will treasure the memories made during the show forever as she constantly does her best to ease the disappointment that she knows her partner, Kai is feeling. It is a sad ending for the fan favorite. Just a couple of days ago she tweeted with excitement about being a finalist on the hit show.

The Strictly Come Dancing finale will take place this upcoming Saturday. All eyes are on the show to see how they will pull off the ending of such a busy season.