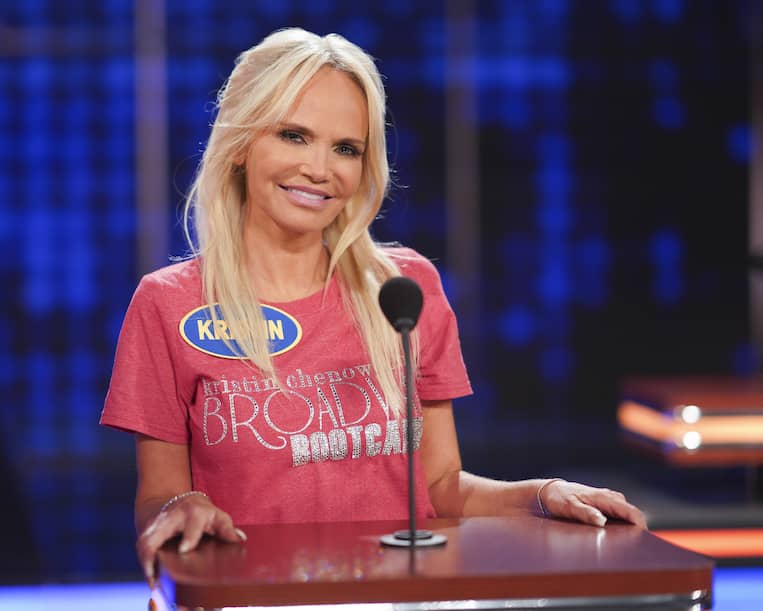 Game shows put a lot of pressure on people, which could lead to hilarious and sometimes embarrassing answers. Chenoweth’s recent experience on Family Feud is a clear example of nervousness getting the better of someone resulting in an inappropriate and funny answer.

During a guest appearance on The Jennifer Hudson Show, Chenoweth recounts the moment she gave the embarrassing answer. Admittedly, Chenoweth was nervous during Family Feud and she’s not someone inclined to such games, only doing so for charity.

Chenoweth begins by saying that she was flattered when Harvey introduced her as one of the nicest people in Hollywood. When the question was asked by the host, Chenoweth remembered what she was told to do in that moment. She was instructed to press the buzzer first no matter what, which she did so without thinking for an answer yet.

This led to the now-viral moment where Chenoweth answered “rhymes with heinous,” to the question “After the lips, what’s your favorite part of a man to kiss?” Chenoweth then shares her regret over what happened saying “I am sorry, ladies and gentlemen, that I said that. I will never do that again. I will never be on Family Feud again.”

Finally, Chenoweth shares a funny happening while she was at the mall when she was approached by a lady. The lady brought up her answer at the show saying “you said, rhymes with heinous?”

Unfortunately, due to the viral moment, Chenoweth jokes that she’ll never be on the show again. Although Chenoweth says she won’t return, we hope to see another hilarious mishap in the future.

Will Chenoweth Appear on The Voice Season 22?

Since the newest season The Voice‘s premiere, fans have wondered if the former advisor will return to the series. For those who may have missed it, Chenoweth was previously the battle advisor to Ariana Grande’s team. For those who may not know, Chenoweth and Grande are very close friends.

As of the moment, it doesn’t seem like Chenoweth will make an appearance on this season of The Voice. Since she is currently working on other project, we can safely say that she probably won’t be showing up this season.

The former battle advisor has recently been occupied working on the docuseries 1300 Miles to Broadway inspired by her Broadway Bootcamp. She has also been giving her advice and mentoring Grande on her role in the 2024 film Wicked.