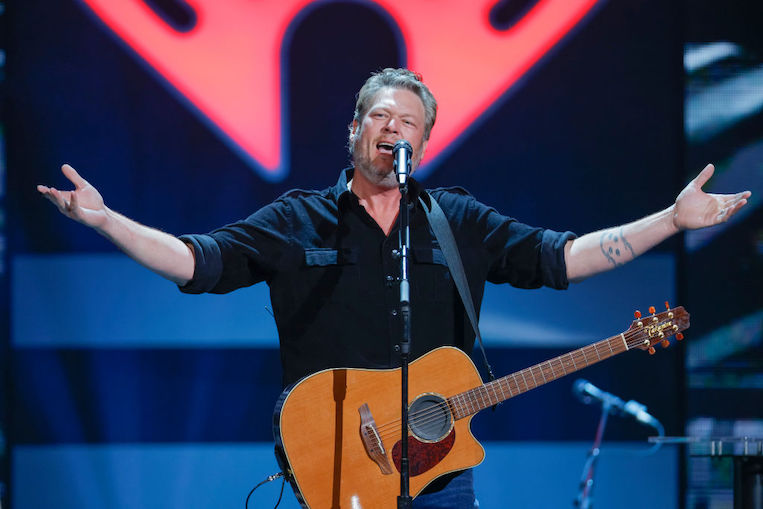 The Voice coach Blake Shelton has a new song out called “No Body,” and the music video is a total throwback. The country star rocks a mullet and a cowboy hat in the ’90s-inspired clip, which also features line dancing.

Shelton’s new track is similar in premise to his duet with wife Gwen Stefani called “Nobody But You.” It’s about not wanting anyone else but the one you’re with. He sings, “Don’t wanna scoot the boots with no body / Get straight tequila drunk on no body / Wrap these arms around no body / No body but yours.”

The song’s music video shows him performing the song on stage at a bar where people are line dancing in cowboy boots and denim shorts. The track definitely has a bouncy retro feel, and Shelton told People that this inspired the music video.

“I remember saying to Scott Hendricks (his producer), ‘Wow, man, this would’ve had a line dance to it if it had come out in the ’90s,'” Shelton said. “That was the last time we ever looked back.”

Shelton also posted about the song and music video on his Instagram account, writing that it “takes me back to the ‘90s when I was in high school and first moved to Nashville because it feels like what the music sounded like at that time.”

Would Shelton Wear a Mullet Again?

Shelton told People that wearing a mullet again felt “completely natural.” But since the bar was so hot, it reminded him of why he cut it, saying, “Hair was sticking to my neck and the side of my face. And I remember thinking, ‘Oh yeah, this is why I ended up cutting my mullet off.’ Not because it wasn’t cool anymore or trendy, just because it was physically irritating.”

“I guess I don’t care about trends, because when I had the mullet, it wasn’t cool,” Shelton recalled. “And now that mullets are cool, I don’t have one. So I guess I don’t follow. I should. I’m not against them. I’m just always a little bit late.”

Even if Shelton doesn’t bring his mullet back, you can always check out his older music videos to get a glimpse. The video for his 2004 release “Some Beach,” for example, shows him looking a lot like he does in the “No Body” video, complete with a cowboy hat.