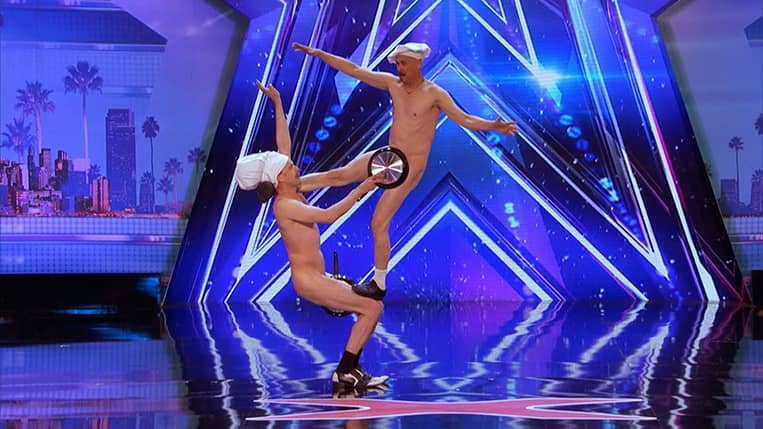 America’s Got Talent sometimes forgets that it is a family show. Men with Pans put on one of the raunchiest performances in the show’s history. There’s a reason why their Season 12 audition now has over 231 million views across multiple platforms. Though they first performed the act in 2015 on Das Supertalent, the AGT stage is where most of us first got an eyeful of this bold act.

Kevin Brooking and Colm O’Grady were former circus clowns who had been performing together for 10 years at the time of their AGT audition. They came out in chefs’ coats and hats like they were about to compete on MasterChef. Heidi Klum assumed their act was going to be juggling pans. Well…she thought very wrong.

Kevin and Colm went backstage, only to return with just chefs’ hats with shoes on. The novelty of their act is to try and lift the pans while still covering up their genitals. In the very beginning, the AGT logo flashed over one of their butts when the pan was lifted. Simon Cowell buzzed the act almost immediately. Mel B buzzed the act soon after.

Cowell cupped his hand over his mouth in disbelief as they attempted a balancing trick to take their act up a notch. Everyone in the audience was laughing hysterically. One of the guys did drop their pan and was showing full-blown booty to the audience by the end of the routine. Howie Mandel and Klum gave the act a standing ovation. They were nearly doubled over with laughter.


Men with Pans got very mixed reviews from the AGT judges. They did move on to the Judge Cuts but no additional performance of theirs was shown. Regardless if they got cut or withdrew from the competition, their time on AGT in 2017 left a mark on fans of the franchise forever. They were getting ready to cook up more performances on tons of other talent shows.

What Happened to Men with Pans After ‘AGT’?

Men with Pans have really been able to take their act all over the globe. After their stint on AGT, the duo shared on Facebook that they were traveling to Romania to perform on iUmor in 2017. This led up to a performance at Crazy Horse Paris, a legendary cabaret spot embracing nude performers. Men with Pans has been a featured act in several burlesque stage shows.

They have since taken their act to the International Comedy Festival in Bogotá and with AGT alum Tape Face in Switzerland. Men with Pans decided to bring their act to Season 14 of France’s Got Talent in 2019. They performed a routine identical to the one they performed on AGT. This time there was no censoring. History repeated itself because they did receive two red buzzers from the judges.

The red buzzers did not get them down. They decided to perform on Tu Si Que Vales in 2020. They called their act “Naked Lunch.” You probably already know by now that they did their signature lift that looks a little awkward on stage. The duo did not make it very far on this show either. At least they’re having fun with it and showing viewers that frying pans are more useful than they thought.

They Now Have One of the Most-Viewed Auditions

Men with Pans did receive a very special honor from AGT in 2020. To celebrate the 15th anniversary of the show, NBC aired a special countdown naming the 15 most viral acts in the show’s history. Men with Pans landed in the eighth spot on the list. They managed to rank above Shin Lim and V. Unbeatable. People really do love the more obscure acts.

Their act might not have brought home the $1 million prize, but it did make people laugh which is exactly what the audience wants. These shows are not all about winning. It’s about entertainment and gaining exposure, or in the case of Men with Pans, exposing themselves.