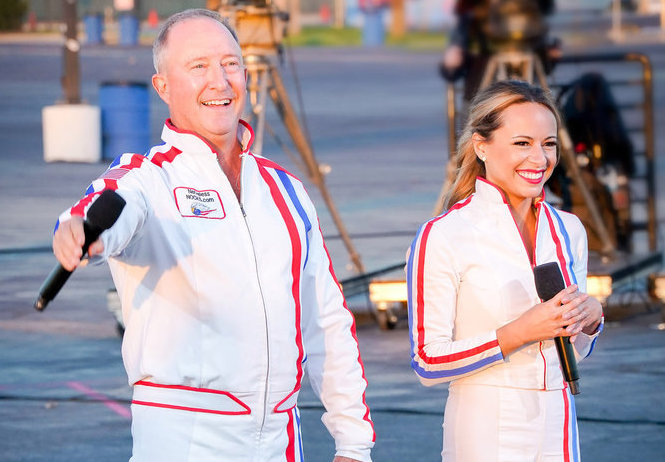 AGT: Extreme released one of four auditions ahead of their finale episode on Monday. This early release follows family legacy, the father-daughter duo Nerveless Nocks. The duo stuns the audience with their aerial tricks 80 feet above the ground, but it’s it enough to be named The Champion of AGT: Extreme?

Nerveless Nocks is a group of daredevils dating all the way back to 1840. This group is a daredevil circus family on their social media, but only Angelina and her father Michelangelo Nock will be performing on the series. The Nerveless Nocks specialize in everything danger as a group.

Their tricks include globe of death, sway pole acrobatics, waterskiing, and more. Their group name comes directly from Queen Elizabeth. She originally called Michelangelo’s father simply nerveless after he performed for her. The name caught on ever since.

Angelina and Michelangelo performed on their 80 foot sway poles for their AGT: Extreme audition. Just like Cyndel Flores, this group shared that there’s no safety padding or harness for their act. Since they’re a father-daughter act, they’re hoping that the special bond they have helps them stand out in the competition. The Nocks strived to take this performance to another level since it was Angelina’s first time on the pole since she broke her leg.

Angelina and her father climbed 80 feet up the poles before beginning their act. Once both were atop of the poles, they began swaying the poles back and forth. After the adrenaline rush of the swaying, the duo started doing upside down tricks including one where they swayed the poles and switched places. At the end of the act, both the father and daughter death dropped the 80 feet.

The judges gave this act a standing ovation. This sneak preview ended before the judges gave the duo their notes, but I’m sure they’ll get three yeses. The judges and audience absolutely loved the danger and intensity behind this act. I fear that the timing of this act will affect their chances at winning the overall prize in the long run. If anything, I think they deserve to be one of the last acts standing.

How is This Different Than Breakaway Sway Pole?

As soon as the act began, it was obvious that this father-daughter duo was set to perform in a similar fashion as Cyndel. The biggest difference between the acts is the fact that there’s an added section holding Cyndel’s pole up. There’s almost like an anchor near the middle of the pole that creates the breakaway portion of it. The Nerveless Nocks only have what looks to be a pole anchored on the ground, so it’s very different.

When it comes to their tricks, the acts were pretty similar. The most notable difference between the two is definitely the dismount. Angelina and Michelangelo dismounted the sway pole by sliding down, while Cyndel’s pole broke away and swung down. Each acts dismount couldn’t have happened on the others equipment. Up to this point, there hadn’t been acts this similar on the AGT: Extreme stage, so I’m interested to see how both of them doing in the long run.