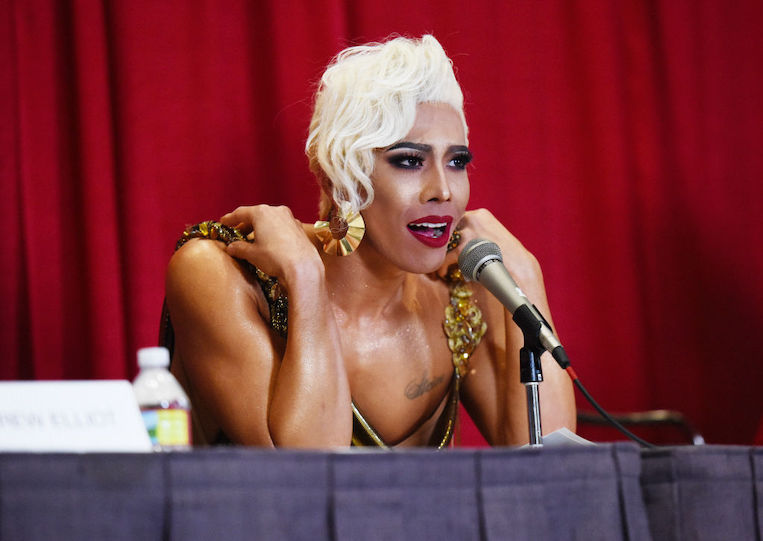 The first episode of RuPaul’s Drag Race UK Vs The World was definitely filled with loads of drama. While many expected another exciting series, I don’t think anyone expected this beginning. Contestant Pangina Heals is now receiving backlash on social media for choosing a fan favorite for elimination.

The first episode of the series featured a talent show runway with “I’m A Winner, Baby!” as the theme. Within the episode, each queen showed off their talent for the judging panel including guest judge Spice Girl Mel C.

These queens showed up to impress. The outfits, the acts, the music.. everything was top tier. Within the episode, Lemon, Janey Jacké, Cheryl Hole, Pangina, and Blu Hydrangea gave lip sync performances. Mo Heart, Baga Chipz, and Jujubee gave live singing performances, while Jimbo gave a comedy performance. Pangina was the winner of the night with Jimbo coming in second.

Lemon and Janey Jacké in turn were placed into the bottom two. Since Pangina won the episode, she had to decide which queen went home.

“I am not playing favouritism,” Pangina said. “I’ve known everyone for the same amount of time but I am choosing this person out of the idea of which show was original, and I have made the decision that I am sending Lemon home.”

While many would think this was the best way to approach the situation, fans didn’t agree. When Lemon made her exit she made sure to acknowledge that Pangina didn’t make the right decision. Before her exit she shared her love for fellow Canada’s Drag Race alum Jimbo.

RuPaul’s Drag Race UK Vs The World Is Just a TV Show, It’s Not That Deep

After the premiere, Pangina received loads of hate on social media. She shared that fans of the series have been sending her racist remarks and death threats. Pangina expressed that she has nothing but respect and love for each of the other queens on the show.

Lemon has been quick to comment on the backlash Pangina is receiving. Fellow Canada’s Drag Race alum, Jimbo, has gone out of her way to remind fans that RuPaul’s Drag Race UK Vs The World is just a tv show and there’s no hard feelings in real life. In Lemon’s latest tweet about the situation, she shared that she would love to perform on Pangina’s series Drag Race Thailand.

Now, Pangina has replied to fans on Twitter sharing that she feels much better and wants to turn the hate into something positive. In turn, this queen has set out to create a wall of balloons. Each balloon will have a hurtful word on it. She will throw darts at the balloons and each she’s able to take out she will donate money (with the help of fans) to a charitable organization against online bullying. Right now, she has 4 people lined up in the fundraiser with her.