Magician Stefano Bronzato took Italia’s Got Talent by storm this season. The 28-year-old showed off some amazing card tricks for the judges.

In his audition, Stefano made things disappear and even turned back time. The magician went on to win the show. However, his final performance has caused controversy, as people have compared it to AGT winner Shin Lim.

Stefano started his Italia’s Got Talent audition by making a marker disappear and then reappear in his hand. He then took a photo of an empty wallet using judge Frank Matano’s phone. This would come into play later in the routine.

He had judge Federica Pellegrini choose a card from the deck. He then chose a different card and had her sign it before he tore it into four pieces. After that, he switched the cards and made her original choice the one that was torn up, while the signed one was in one piece.

RELATED: MENTALIST STUNS THE JUDGES WITH MIND-READING TRICK ON ‘ITALIA’S GOT TALENT’

Stefano then put the pieces of the torn card into judge Mara Maionchi’s hand before literally turning back the time on all of the judges’ phones. When Mara opened her hand, the card was back in one piece again.

To top everything off, he asked Frank to show off the photo of the wallet on his phone. The card could be seen inside the plastic photo sleeve, even though it wasn’t there when the photo was taken.

Is Stefano’s Act Too Similar To Shin Lim?

Stefano received four “yes” votes from the Italia’s Got Talent judges to move on. For his final performance, Stefano made cards come out of his mouth and even changed one card into another by moving the shapes before everyone’s eyes. He also showed off two of the chosen cards drawn on his own body.

RELATED: 13-YEAR-OLD GYMNAST WITH ONE LEG WILL PROVE TO YOU THAT NOTHING IS IMPOSSIBLE

This is very similar to tricks Shin Lim did on America’s Got Talent in 2018. Many people in the comments of Stefano’s video have pointed out the similarities between the two acts, with one calling it a rip-off.

Nevertheless, Stefano was voted to be the winner of Italia’s Got Talent 2021. The magician currently has 16,000 followers on Instagram. Shin Lim, who has over 800,000 followers, doesn’t appear to have addressed the issue on his own social media. 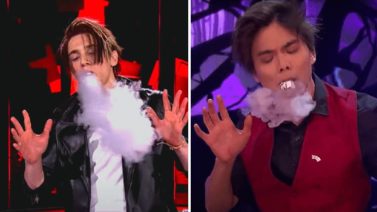