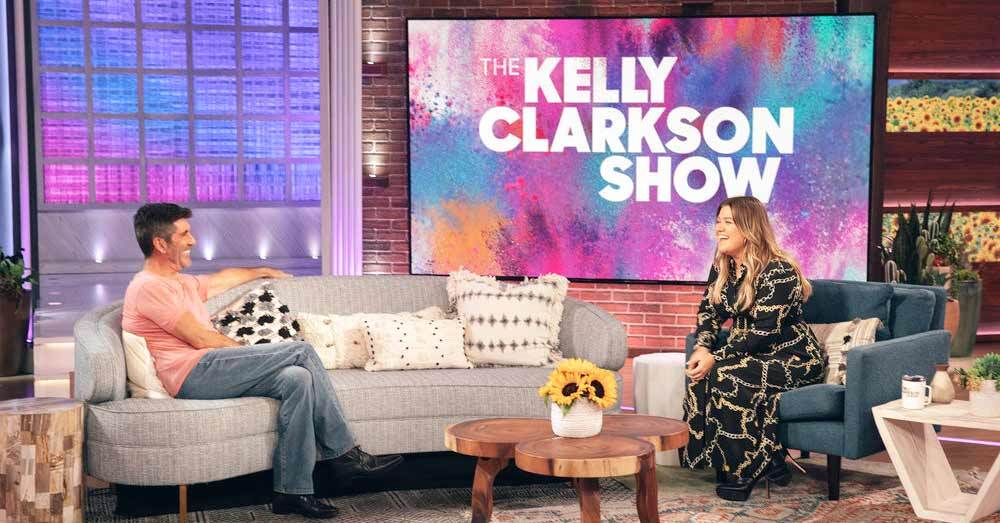 Simon Cowell appeared on The Kelly Clarkson Show for the ultimate talent show crossover. Kelly Clarkson won American Idol in its first season and now coaches on The Voice with today’s guest performer Blake Shelton. After chatting with ‘AGT’ judge Cowell, who she filled in for on ‘AGT’ this season, she spoke with Michelle Williams who competed as The Butterfly on The Masked Singer.

Simon Cowell Applauds Clarkson For Filling in For Him on ‘AGT’

Cowell looks incredible after his electric bike accident in August 2020 that left him with a broken back. He is also sporting a new set of veneers. He detailed the injury and how it happened right in front of his 7-year-old son Eric. Cowell was thrown about 8 feet in the air from the bike. He knew that after breaking your back, you’re not supposed to move, but decided to drag himself to his bedroom.

As he was bleeding and about to pass out, EMTs arrived. He now reflects on a funny moment where he thought he was hallucinating that there was a girl in his room, but really, she was just there to give him a COVID-19 test. The music mogul went into the hospital that night for a surgery he recalls was seven or eight hours. He called the doctor who performed the surgery “the most kind, amazing, smart person you’ll ever meet.”

During this time, Clarkson filled in for Cowell on the ‘AGT’ judging panel. Cowell got to watch Clarkson’s big debut on the show and praised her.

“You almost did too well Kelly,” he said.

Cowell knew that if Clarkson was available she would not hesitate to step in for him on the show. She meshed really well with the other judges and even flexed her British accent behind the scenes. Cowell tried to do a country accent on The Kelly Clarkson and lowkey sounded like he was impersonating Shelton.


Cowell Reflects on How Becoming a Father Changed His Life

Shifting gears, Clarkson brought up Cowell’s Wishfits book series that he is doing with Eric. He’s not the same guy she met at the American Idol auditions back in 2002.

“After I lost my parents, I genuinely felt Kelly, I would never feel that kind of love for anyone ever again until I saw the scan of him for the first time,” the 61-year-old said. “I can’t imagine my life without him. He’s the most amazing thing that ever happened to me.”

Eric may have a future as a talent show judge on one of Cowell’s many shows. Cowell teased Season 16 of AGT and applauded all of the contestants who came onto the show because they all have a positive attitude. He even said that for many of the acts on the upcoming season, they developed their acts during quarantine amid the pandemic.

“There are some amazing stories you’re going to see and then there are some wacky acts but I love that combination,” he said.

After being in the entertainment industry for years, it’s no surprise that some of Cowell’s favorite acts to see are singers. The hardest acts for him to watch are always comedians because of the silence of the crowd. He was happy to find out that Clarkson has adopted some of his judging techniques over on The Voice. She called herself a mixture of Cowell and Paula Abdul. He applauded her for becoming such a star over the years after they first met on American Idol.

“You’re one of the nicest people I’ve ever met,” Cowell said. “Most loyal, I can say that because we’ve known each other a long time. If people ever say what advice you can give me, I say ‘follow Kelly,'” Simon added.