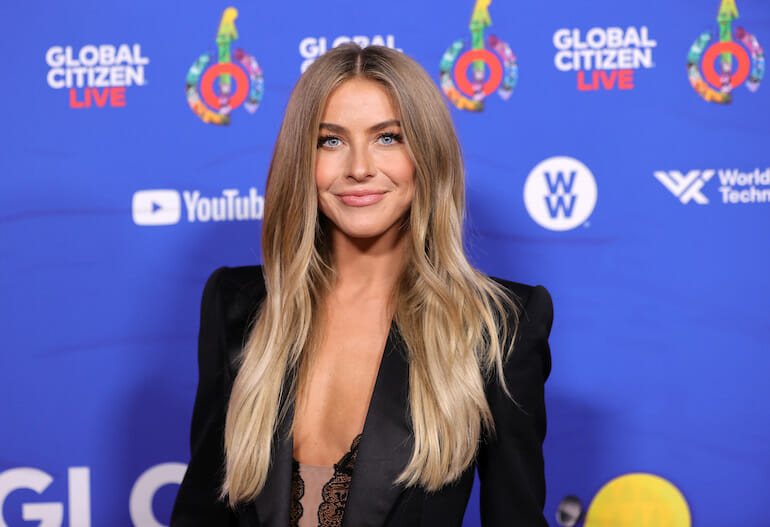 Julianne Hough became one of the most popular pro dancers in Dancing with the Stars history during her time on the show. Fans were buzzing when she was announced as a judge on America’s Got Talent in Season 14. Hough proved that she is a triple threat throughout her career full of huge achievements. Why did Hough exit AGT after only one season?

Julianne Hough Rose to Fame on ‘Dancing With the Stars’

Hough competed as a pro dancer on Dancing with the Stars for five seasons. She first became a pro on the show in Season 4 with her partner Apolo Anton Ohno. She won that season and the following season with Hélio Castroneves. Hough announced she was leaving the show in 2008 to further her music career. The hiatus did not last very long. She returned to the competition and began dating her Season 8 partner, Chuck Wicks.

After roles in Footloose, Rock of Ages, and Safe Haven, Hough returned to Dancing with the Stars to step into a new role as a guest judge. It went so well, she became a permanent judge on the show in 2014. Hough served as a judge until 2017, only skipping Season 22 in between to work on other projects.

She made the move from ABC over to NBC for AGT in 2019. Simon Cowell and Hough got into it during Judge Cuts that season. Cowell made his trademark “meow” noise during Hough’s critique of an all-female act. She decided to speak up about it and he pledged to never make that sound again while she was talking.


Why Did Hough Leave ‘AGT’?

Hough and new judge Gabrielle Union exited AGT after only one season. Union came forward with claims of a toxic work environment behind the scenes. She called Hough out in her lawsuit filed against NBC. Union went on to say that as someone who advocates on behalf of minorities, it was a slap in the face for NBC to hire Hough who openly wore blackface in the past.

Hough wore blackface on Halloween in 2013 dressed as a character from Orange Is the New Black. It sparked controversy at the time and she put out an initial apology in 2013. In 2015, she spoke out about it again when the pictures resurfaced. Union’s lawsuit called attention to the photos of once again in 2020 and 2021.

Hough initially denied experiencing a toxic work environment on AGT and was looking to continue her working relationship with NBC. In an appearance on The Today Show, she commended Union for speaking out about the treatment she faced. We’ll never know what really happened behind the scenes of AGT Season 14 but NBC decided not to pick up Hough’s contract for another season.

Her Marriage Began to Crumble

Hough met NHL player Brooks Laich in 2013 and confirmed they were dating in 2014. They were engaged a year later. The pair were married in ​​July 2017 at an outdoor Idaho wedding. In the summer of 2019, Hough shared with the world that she is “not straight.” She went on to say that she’s never been a fan of labels.

In January 2020, rumors began swirling that Laich and Hough hit a rough patch in their marriage. She was spotted out without her wedding ring and they were reportedly spending time apart. When the pandemic hit, the couple revealed they were living apart. Hough stayed in Los Angeles while Brooks stayed in their Idaho home.

On May 29, 2020, Hough and Laich confirmed their split to People Magazine. In July 2020, Hough celebrated her 32nd birthday at a pool party with Laich, leading to rumors they were reconciling. On Nov. 2, 2020, Hough filed for divorce from Laich.

Focusing on KINRGY and the Recent Controversy Over ‘The Activist’

Hough has been very open in the past few years about her struggle with endometriosis. She received a formal diagnosis at age 20 after being rushed to the emergency room during a live taping of Dancing with the Stars. Hough kept the diagnosis to herself for years until she finally understood it and felt like she could speak out about it.

Thanks to her new lifestyle transformation, Hough’s endometriosis symptoms have gotten a lot better. She said that connecting back to her “truth” and giving love and kindness to her body has decreased her endometriosis pain. She has been pretty busy lately with her company KINRGY, a “community dedicated to transforming lives through energy in motion.” Hough announced that she is opening a KINRGY studio in Los Angeles this year.

She was also announced as a judge on The Activist in September alongside Priyanka Chopra and Usher. It was supposed to be a CBS competition series produced by Global Citizen. The premise was initially six activists competing for funding for their respective causes. The cause that received the most funding would win the competition.

There was a major uproar over this announcement because many called Hough out for not being qualified to judge the competition. They referenced the blackface incident and the fact that the premise of the show was hypocritical. Hough responded to the backlash in an Instagram post and even agreed that she is not an activist. The idea for the show got a major makeover. It will now be ​​a primetime documentary special set to air at a later date.