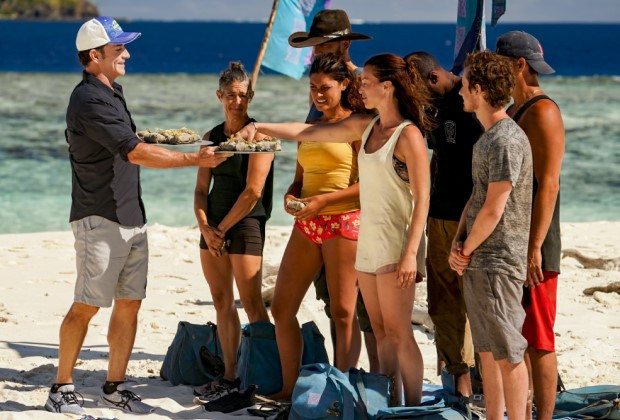 Episode five of ‘Survivor: Winners At War’ saw a tribe swap that led to the creation of a third tribe, Yara. The swap caused alliances to crumble, new relationships to form, and even caused an old romantic relationship to resurface. Tonight’s tribal council was a complete shock to the audience as well as the longtime veteran player who was sent to the Edge of Extinction. Keep reading to find out the events leading up to this shocking elimination.

‘Survivor’ Contestants Face Their First Tribe Swap Of The Season

The episode opened with Jeff Probst’s famous line “drop your buffs.” The contestants then randomly chose their new buffs to separate them into their new tribes. The Sele tribe looks particularly interesting because it now has Wendell Holland and Michele Fitzgerald who once dated. Wendell is extremely standoffish towards Michele back at camp and says that they shouldn’t be talking to each other right away. Michele is visibly shocked and feels like her only true ally on the new tribe is Parvarti Shallow.

Rivals Rob Mariano, Adam Klein and Ben Driebergen all find themselves on the new Yara tribe. This makes for an awkward initial conversation after they make their way to their new camp. The three are joined by Sophie Clarke and Sarah Lacina who feel like they are on the outs with their new tribe.

A Tricky Puzzle Causes An Immunity Challenge Loss For Yara

Yara struggles through the immunity challenge where they have to help each other up a rope ladder and down a net. This is shocking because Rob usually excels at challenges where he can physically lift people up and throw them over the obstacles. Then, the dreaded Survivor puzzle at the end of every immunity challenge stumps them. The other two tribes complete the puzzle, sending Yara to tribal council.

Boston Rob devises a plan that he calls “The Buddy System.” It is a strategy that he often used in his other Survivor appearances. He tells Ben and Adam that the three of them need to stick together before the tribal council and act like nothing is wrong. They all agree to vote out Sarah, leaving Sophie in the dark for the vote.

A Shocking Blindside Ended The Night

It seems at tribal council that Ben and Adam are both on board with Rob’s plan to blindside Sarah. Both Sarah and Sophie plead their case to the men and state that they would be open to forming possible alliances with them in the future if they stay in the game.

With two votes for Sarah and two votes for Rob, it certainly came as a shock when Jeff revealed that the final vote is for Rob. Rob looks completely shocked and blindsided as his torch is put out. He now joins his wife Amber on the Edge of Extinction and will try to earn his spot back in the game.

On his way out, Rob yields his fire token to Parvarti, as each eliminated player must give it to someone who is still left in the game. Who will be sent to the Edge of Extinction next week and what kind of challenge will be thrown at the exiled contestants?