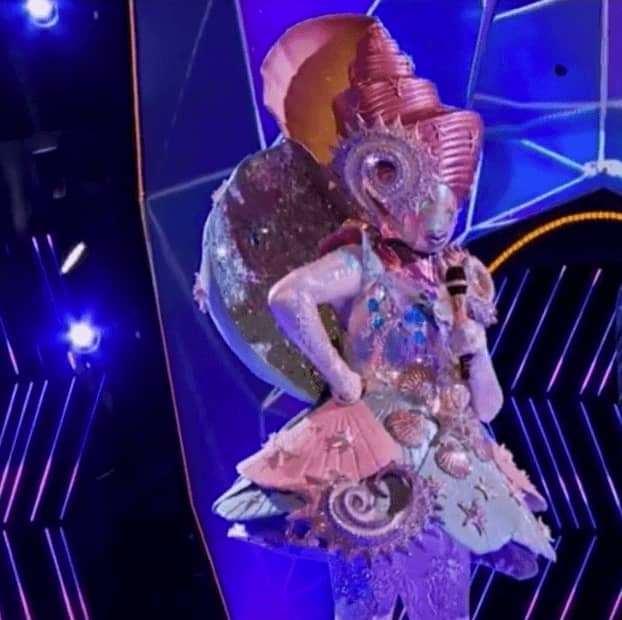 The Masked Singer gave viewers a supersized episode this week with a double elimination. This special 2-hour episode saw the Super 8 battle it out with some epic performances. Superstar singer Rita Wilson joined the judging panel to help guess the identities of the celebrities underneath the masks.

Which Two Celebrities Were Eliminated On ‘The Masked Singer’?

While we saw eight incredible performances tonight, we sadly had to say goodbye to two contestants. Based on the votes of the judges and the superfans, The Crab and The Seashell were eliminated from the competition.

Who Was Underneath The Crab Mask?

This week, the contestants gave the judges another big clue by showing them what their favorite food is. After The Crab’s performance of “In The Air Tonight” by Phil Collins, he revealed that he loves eating marshmallows and roasting them over the fire when with his kids.

The Crab was revealed to be…Bobby Brown!

Here are the clues that led the judges to these guesses:

Clues: The Crab was claustrophobic during his last performance. The same thing happened at his talent show when he was a kid. There were several references to Brooklyn in the clue package. He was applauded at the talent show and won. He then did talent shows every chance he got. The talent show judges held up cards with 10’s on them and a jack playing card. They threw stuffed animals and roses at his feet.

Who Was Underneath The Seashell Mask?

The Seashell was revealed to be…Tamera Mowry!

Here are the clues that led the judges to their guesses:

Clues: The Seashells clue package made a lot of references to infomercials or being on the news. A roasted chicken sat on the news desk. When she first appeared on television she was terrified of being on stage. She had to go live on tv for the first time with no rehearsal. An alert ran across the screen that said “twister twister.”

There was a clue that made a reference to TNT. Now being on The Masked Singer stage has helped her grow her confidence. A screen behind her flashed pictures of lemon jello and cookies. There was also a Christmas tree clue. The Seashell’s food clue was stolen by the odd Cluedle-Doo figure that we keep seeing in between the performances.

Which Contestants Are Moving On To The Spicy 6?

There are six contestants left in the competition and no telling who will walk home with the win.

Who Is the Piglet?

Clues: The Piglet stood on a sinking ship in the clue package. He explained that life hasn’t always been smooth sailing. He broke his finger and moved in with his parents when he was younger. There was a peace sign/foam finger clue.

His pastor at church saw a vision of a man with a broken finger sailing a boat towards a terrible storm. The Piglet knew the vision was about him. He packed up his stuff and moved to Los Angeles to start a new life. Now, he thinks everything is a sign. There was also a UFO in the clue package.

SEE ALSO: WHO IS THE PIGLET? ‘THE MASKED SINGER’ PREDICTION + CLUES DECODED!

Performance: The Piglet sang “The Pretender” by the Foo Fighters. The background dancers were wearing pig masks on their heads and jumping all around the stage. Confetti fell across the stage and the performance was complete with smoke and dramatic lighting. The Piglet’s favorite food is cotton candy which reminds him of his very first job.

Clues: The Robopine has been struggling with depression lately but the competition has given him confidence. He loved singing in the shower when he was younger. His family always told him to shut up.

One day he stopped at a block party where he sang for the first time. He was a hit and felt a sense of release and has been singing ever since. There was a stack of baby toys in the clue package along with a Roman statue.

SEE ALSO: WHO IS THE ROBOPINE? ‘THE MASKED SINGER’ PREDICTION + CLUES DECODED!

Performance: The stage was lit by candles as The Robopine serenaded the judges with Marvin Gaye’s “Let’s Get It On.” The judges were left swooning after he commanded the stage. His food clue after the performance was a plate of lobster. His family has a tradition of going sea diving in Costa Rica.

Judges Guesses: Robin Thicke thinks it is ‘AGT’ host Terry Crews under the mask. Jeong feels like it could be Aaron Hall from the group Guy. Nicole Scherzinger obviously had to guess that it is Jamie Foxx underneath the mask.

Clues: Ever since The Chameleon was little, he idolized someone famous. He met his G.O.A.T through a contest at a local radio station. They even worked together on music. The number two kept popping up in the clue package. He called his idol a true friend, his ride or die. The camera focused on a photo of two bucks putting their antlers together.

Performance: The Chameleon performed “Regulate” by Warren G feat. Nate Dogg. He was surrounded by dancers dressed in chameleon costumes. The whole performance was dripping in swag and fun party vibes. The Chameleon revealed his favorite food is already made meals.

Who Is The Yeti?

Clues: The Yeti had a once-in-a-lifetime role that created an avalanche of success. His ego eventually led to his demise. He held letters in his hands while talking about the emotional moment in the clue package.

In the next scene, he pulled a puppy out of a hat. Finally, The Yeti got a twice-in-a-lifetime chance. The fluffy monster was line dancing in the clue package and the people in the background were celebrating New Years’.

SEE ALSO: WHO IS THE YETI? ‘THE MASKED SINGER’ PREDICTION + CLUES DECODED!

Performance: The Yeti sang “Lonely” by Benny Blanco and Justin Bieber. This performance was awesome because The Yeti wore a pair of roller skates and glided across the stage. Scherzinger had tears streaming down her face. He revealed that his favorite food is donuts.

Judges Guesses: Scherzinger thinks it is Sisqó or singer Todrick Hall. Jeong believes the clues point to it being Justin Timberlake. Thicke either thinks it is Omarion or Mario.

Clues: The Russian Dolls had a time in their careers where they felt like everyone gave up on them. They were once on top of the world which was represented in the clue package by standing on top of the Statue of Liberty. They also stood in front of a sign that said Indiana Ave.

They even got a blessing from “the king herself.” There were four Russian Dolls in the clue package. They practiced and got back on top and sold out a venue near the Russian Tea Room. The teacups in the clue package said “Eat” and “pray” and another one had a question mark on it.

Performance: The Russian Dolls sang “24k Magic” by Bruno Mars. They accessorized this week with gold chains and one of them even wore a baseball cap. A third and fourth doll came out midway through the performance. The food clue after the performance was a bowl of red jelly beans.

Judges Guesses: McCarthy and the others guessed that it is the Red Hot Chili Peppers. Jeong thinks it could be The Jonas Brothers. Scherzinger also threw out another guess and thinks it is Hanson. Wilson thinks it is the members of the group Boyz II Men.

Clues: The Black Swan stood in her childhood bedroom in the clue package. A teddy bear sat on a chair with a sign that said “I’m Late.” She grew up with her mom in a one-bedroom apartment. Her mom gave her the gift of music and she listened to songs on a record player. The camera panned to two gnome statues sitting in the corner.

Once she became successful, she was able to buy her mom her first real home. There were a ton of references to Cinderella including a glass slipper, clocks and ballroom dancing. The man she danced with in the clue package wore a shark fin on his head.

SEE ALSO: WHO IS THE BLACK SWAN? ‘THE MASKED SINGER’ PREDICTION + CLUES DECODED!

Performance: The Black Swan sang “Use Somebody” by Kings of Leon. It was a slowed-down rendition that focused heavily on powerful vocals. She blew the judges away with her control. Her favorite food is Goldfish crackers.

Judges Guesses: Wilson believes it is Ke$ha underneath the mask. Jeong thinks it is Nelly Furtado or Demi Lovato. Scherzinger thinks it is either Becky G or JoJo.