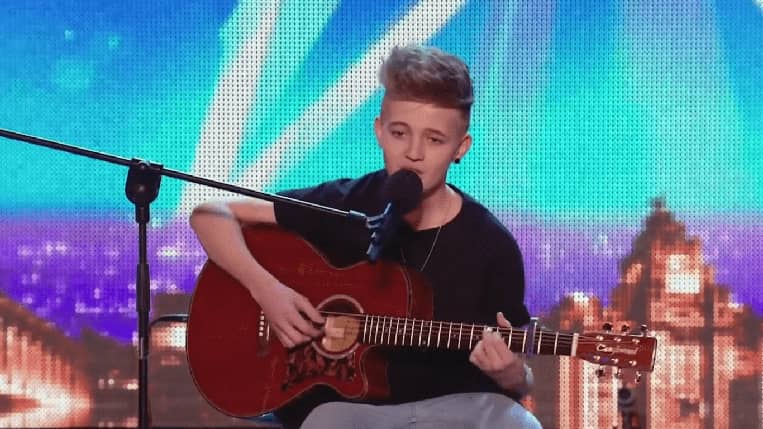 In 2014, a 14-year-old singer named Bailey McConnell impressed the BGT judges with his emotional original song. The performance brought some people in the audience to tears.

The judges had nothing but good things to say about Bailey’s audition. Check it out below, and read on to find out more about what Bailey has been up to since the show.

“Why do I like you already?” Alesha Dixon asked Bailey when he introduced himself to the judges. “You seem really cheeky,” she added, and Bailey admitted, “Maybe.”

Bailey said he would be singing one of his own original songs, explaining, “One of my close, close, close friends kinda turned on me. It was just really unexpected, and it really, really hurt me. It wasn’t a very good experience, but it’s made me the person I am today.”

He went on to perform the song, called “Dying Hole,” while playing guitar. The performance brought his mother, who was sitting in the audience, to tears. Several others could be seen getting emotional as well.

The audience and judges gave Bailey a standing ovation for the audition. Amanda Holden said it was “incredible,” and told him the experience will only make him “stronger” and “even more talented.”

What Is Bailey McConnell Up To Now?

Alesha told Bailey he was “a little star,” adding, “It’s times like this when I wish I was Simon Cowell, because if I had a record label, I’d sign you.”

Bailey made it to the BGT semifinals, where he performed another original song called “Growing Pains.” After the show, Bailey became an ambassador for the mental health charity YoungMinds, and shared that he suffered from depression after being bullied at school.

He also shared that he made up with the friend he wrote the song about. “We are on good terms now, there’s no point in holding a grudge,” Bailey told the Birmingham Mail. “He knows the song is about him but we were just immature back then.”

Bailey, who now goes by Bailey M, recently released a song called “HYLI,” with an accompanying music video. Check it out above.

What Advice Did Jill Biden Give Kelly Clarkson On Surviving Her Divorce?