5 Obnoxious Contestants Who Refused to Leave Talent Show Stages
January 8, 2021
Be the First to Comment 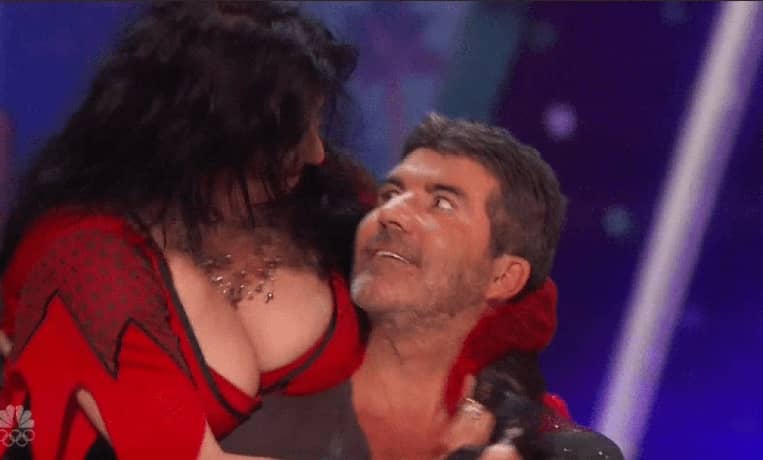 Miranda Cunha’s Season 11 ‘AGT’ audition was pretty unforgettable for Simon Cowell. The performer planted a kiss right on Simon’s lips during her show-stopping singing and dancing number. Check out the audition below that left Simon in total shock.

When Miranda introduced herself during her ‘AGT’ audition, she immediately said “I like you, Simon.” Simon was flattered of course but never expected what would happen next. “You know I am gonna need some help from you Simon,” Miranda said.

She called Simon up onto the stage and greeted him with two kisses. It’s hard to tell if the pair’s lips actually touched or if they just kissed on the cheek. Either way, the crowd went nuts and were in for a real treat at the end of the performance. Simon sat in a chair as Miranda danced around him. She shook her bosom around his head and he started to laugh.

SEE ALSO: 5 CONTESTANTS THAT COULDN’T KEEP THEIR HANDS OFF OF SIMON COWELL [VIDEO]

She ripped off a piece of her skirt and placed it on Simon’s head. He pleaded to the other judges to hit their red buzzers. Miranda began singing “Bésame Mucho” and serenading Simon. The other judges liked watching him suffer and kept saying that they were not going to hit their buzzers. At the end of the performance, Miranda planted a big kiss on Simon’s lips and he looked completely shocked. The other judges and audience members all had their jaws on the floor.

Howie Mandel, Mel B and Heidi Klum all gave Miranda a “yes” because they wanted to see Simon get humiliated again in the next round. Viewers did not see Miranda perform in the Judge Cuts round. This could mean that she withdrew from the competition or was eliminated after a performance that was not shown on television. Check out the compilation below for 10 contestants that humiliated Simon on talent shows. There are some seriously cringe moments for Simon during these performances that you need to see.

Where Is Miranda Now?

After her big ‘AGT’ performance, Miranda has continued to perform at the Bella Vida senior center. “I sing opera there and everyone there loves it,” she said in a recent interview. “I try to go as often as I can because I love going there to sing and perform.” She also revealed plans of moving in with her partner and starting a family with him.

She recently tweeted that she is coming out with her own book. “My New Book Out in April 2021..The Secret Life of Brazilian Bombshell,… Truth Sets us Free!!!” she wrote. She has settled down in Santa Clarita California.”I’ve lived all over the world and there is no place like Santa Clarita,” she said. “This where I want my story to be told.”

SEE ALSO: AWKWARDEST KISSES IN THE HISTORY OF ‘AMERICA’S GOT TALENT’ AND ‘AMERICAN IDOL’ [VIDEO]

Simon has been faced with a number of contestants over the years that have had some major crushes on him but he handles it like a champ every time!