Derek Hough, Hayley Erbert Share Behind the Scenes of Their ‘Kiss the Girl’ Dance
October 18, 2021
Be the First to Comment 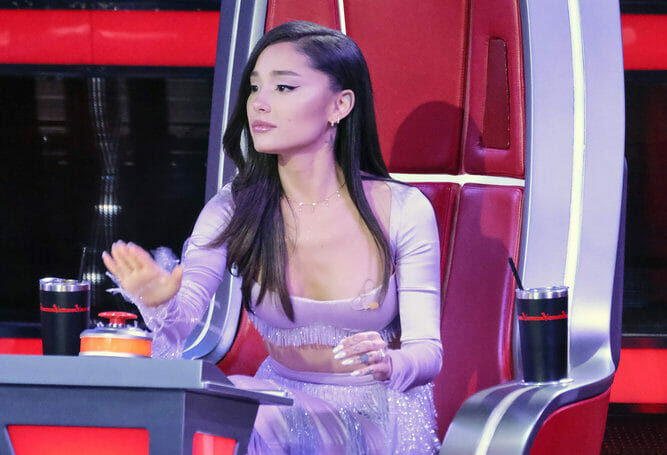 The Voice Season 21 returned for another round of Battles on Monday night, as coaches Kelly Clarkson, John Legend, Ariana Grande, and Blake Shelton put their team members head to head. Tonight’s show featured some incredible performances, as well as two steals from the coaches.

Throughout the show, the coaches expected Grande to steal a couple of the eliminated artists, but she held out for someone who really wowed her. At the end of the show, she ended up with an artist that she mentioned stealing back in the Blind Auditions. Apparently, she keeps her word.

During Monday’s show, Shelton paired up Manny Keith and Wendy Moten for a powerhouse Battle to the song “If I Ever Lose My Faith in You” by Sting. Wendy was a formidable opponent, as she has years of experience as a back-up singer and even sang with Shelton’s Battle Advisor Dierks Bentley.

However, Manny held his own in the performance, and Grande took notice. She complimented Manny’s vibrato, and when Shelton ended up choosing Wendy as the winner, Grande saved him from elimination by hitting her steal button. This is remarkable for a few reasons.

First of all, Grande didn’t even turn for Manny in his Blind Audition. However, when he shared what a fan he is of her, she expressed regret, and told him, “Hopefully I’ll have the opportunity to steal you at some point.” Her prediction came true tonight.

Grande also held out a while before using her steal. During tonight’s show, the coaches expressed shock that she didn’t steal either Keilah Grace (who lost her Battle to Joshua Vacanti on Team Legend) or Aaron Hines (who lost his Battle to Gymani on Team Kelly). Grande said she was waiting for someone truly special, and it turns out that was Manny.

SEE ALSO: WAS ‘THE VOICE’S KEILAH GRACE ROBBED IN THE BATTLE ROUNDS?

Monday night’s show opened with an electric Battle between Team Legend’s Keilah Grace and Joshua Vacanti. They sang “Good for You” by Olivia Rodrigo, and they both put their all into the performance. The singers seemed to really feel the emotions of the song, playfully fighting each other as they sang.

While they both delivered great performances, Joshua’s showing had that extra oomph that made it special. Legend noticed this, choosing Joshua as the winner. Unfortunately, 15-year-old Keilah was eliminated, as none of the coaches chose to steal her.

It’s sad to see her go, as she was definitely talented. But who knows, maybe we’ll see her again in a future season of The Voice.

Grande wasn’t the only coach to use her steal during Monday’s show. Clarkson also hit her button for Team Ariana singer Hailey Mia. The coaches were stunned by the singer’s talent, especially since she’s only 13 years old.

Hailey went up against Raquel Trinidad in a performance of “Car Wash.” The young singer admitted that the Battle took her out of her comfort zone, as Grande encouraged her to use more of her range. (The coach said she’s only been using about 60 percent of her voice.)

It was clear that Raquel was more comfortable with the song, and it showed in her bubbly performance. However, Hailey still impressed Clarkson, who opted to steal her for her team after Grande chose Raquel as the winner. Clarkson said she thinks she “would be a really good coach” for Hailey.

There’s only one more night of this round left before we move on to the Knockouts, as the coaches continue to pare down their teams.

‘The Voice’ Standout Artists that Were Brushed over in Battle Rounds