The Greatest Fashion Transformations of ‘The Voice’ Season 21

Haven’t We Seen This Before? Did Val Chmerkovskiy Rip Off A Dance in The ‘DWTS’ Finale?
December 7, 2021
Be the First to Comment 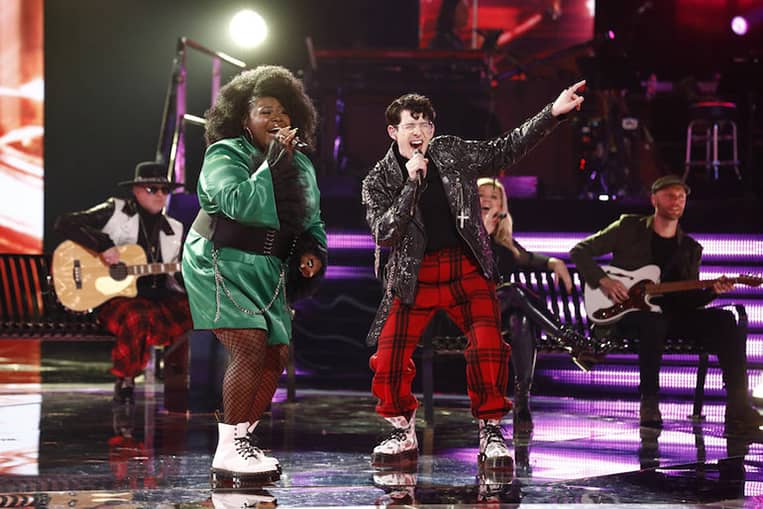 One of my favorite things to do with talent shows is look at contestant wardrobe transformations. Singers come to The Voice to show off their talents, but become huge fashion icons by the finale. The Voice wardrobe department takes the saying ‘you’ve got to look your best to sound your best’ to the absolute next level.

The job of the wardrobe department is to make the singers look like the stars they are. This department works with each singer to plan an outfit that makes them feel like the singer they were always destined to be. I love the outfits on the show this season because they all feel very true to each singer.

These singers already walked onto The Voice with a sense of style, but have really evolved throughout their time on the show. I think their designers chose only the best looks for them this season and it has added to their success on the series. Here are some of the best transformations we’ve seen so far this season.

Let’s talk about Jershika’s semifinals look. I think I audibly said “wow” as she walked onto stage. Her song and outfit choices were the best of the season by far. Jershika has premiered a huge sense of fashion since day one, so her transformation definitely wasn’t the most dramatic, but she still deserves to be mentioned. The wardrobe department took her already great looks to queenly status.

This sibling group came into the competition with comfortable, but nice, outfits. Even though their singing was connected since day one, their outfits weren’t always. After meeting with the wardrobe department, Girl Named Tom has been seen in mostly matching outfits.

The department typically matches Caleb and Joshua’s suits and puts Bekah in a flashier outfit. They always find a way to have her stand out, whether it be a sparkly dress, fun floral print, or different shade of their matching color.

This singer stepped on to The Voice stage in jeans, a button up shirt, a tie, and a dress coat. That look worked well for his blind audition, but it was obvious the wardrobe department wanted to give him a style that’s as bold as his voice is. Since Joshua‘s audition, we’ve seen him rocking bright colors, patterns, and more. He always portrays powerhouse vocals, so he definitely was in need of a wardrobe that’s just as loud as he is.

This 14 year old went into her audition wearing a really cute floral outfit and has been exploring the glam world ever since. Her audition outfit felt very age appropriate and almost gave off a timid, ordinary girl vibe. Hailey‘s on stage confidence has grown immensely during her time on this show and her fashion sense has appropriately matched it.

In the past few weeks, we’ve seen her more “glitzed” in far more intricate dresses. I think Hailey has gained a lot of her on stage confidence from feeling so confident in her appearance as a powerhouse diva.

This seasoned singer came into the competition in an all black outfit that featured a cowboy hat and booties. Even though Wendy already looked amazing on stage during her audition, the wardrobe department helped her experiment with bold colors, prints, and tons of sparkles. I think this wardrobe choice was perfect for this singer because you seriously can’t take your eyes off of her when she’s on stage.

“Get Ready for Love in Las Vegas!” John Legend Launches Vegas Residency in 2022