Where Did ‘The Voice’ Standout Group Girl Named Tom Get Their Unique Name?

Haven’t We Seen This Before? Did Val Chmerkovskiy Rip Off A Dance in The ‘DWTS’ Finale?
November 21, 2021
View 4 Comments 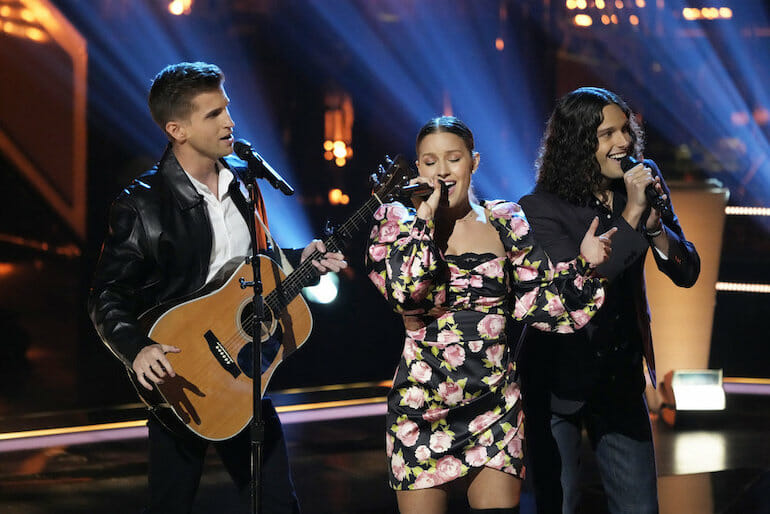 Girl Named Tom have quickly become frontrunners on The Voice season 21. The Team Kelly trio has blown the judges away week after week and earned their spot in the Top 11. Have you ever wondered what this sibling band was up to before The Voice? Let’s look into their career before auditioning for the hit show.

Girl Named Tom is a sibling trio from Pettisville, Ohio. The band members are Bekah (21), Joshua (24), and Caleb (26) Liechty. They got their band name because Joshua and Caleb used to call Bekah “Thomas” when they were little.

The boys clearly wanted another brother, so they made due with who they had. In their youth, these siblings were homeschooled until Caleb, the oldest, was in seventh grade. Their time at home helped the group to bond and play music together when they weren’t studying.

Their First Performance Was at Their Cousin’s Wedding

It wasn’t until 2018 that the idea for their band was put into reality. The siblings were asked to perform at their cousin’s wedding, so they arranged a piece. Caleb and Joshua graduated from Goshen College in 2018 and 2019 respectively. Both boys had minors in piano and vocal performance, so this breakout gig was years in the making.

“[Holly] realized that as all three of us were between schooling, we were uniquely positioned to actually make this work,” Caleb said. “We’d always been told we should be the next Von Trapp singers, but none of us kids had ever taken the idea seriously until our own parents supported it.”

There’s a five year difference between Caleb and Bekah so we can assume she was still in high school at the time of their first performance. Bekah was supposed to follow in her brothers’ footsteps at Goshen College in fall 2021.

During their first year as a band, the siblings drove their old minivan across the country. They played 67 shows in 27 cities. These shows were located in places such as The Green Parrot (Key West, FL), Tellus360 (Lancaster, PA), along with other venues like camps, churches, and house shows. During this time, they also released a 12-track album and three singles.

Girl Named Tom is Currently Thriving, Will They Win ‘The Voice’?

Girl Named Tom were pretty successful as an independent group, but has clearly gained an even larger platform with The Voice. The Liechty siblings didn’t gain their ability to sing that well overnight, it has been reported that they all took vocal and piano lessons separately in their childhood. Now, with coach Kelly Clarkson on their side, it seems like nothing can stop this group.

Their recent song from The Voice has made it high on the iTunes charts. This is the first week that The Voice singers have released music from the show, and this could be very telling for how the competition will end. They are currently at No. 13 on the iTunes Top 100 Songs Chart. It’s very possible that their song will peak at No. 10 before next Monday’s live performance.

As of now, Girl Named Tom doesn’t identify with only one genre of music. They have released multiple songs in multiple different genres. Their styles combine the classics of singers like Joni Mitchell, with some of today’s biggest hits like Taylor Swift.

Girl Named Tom has premiered an entirely new sound on this season of The Voice, and America has quickly become obsessed. After hitting the iTunes charts with their single from the show, there’s a possibility that Girl Named Tom will be the first group to win the series.