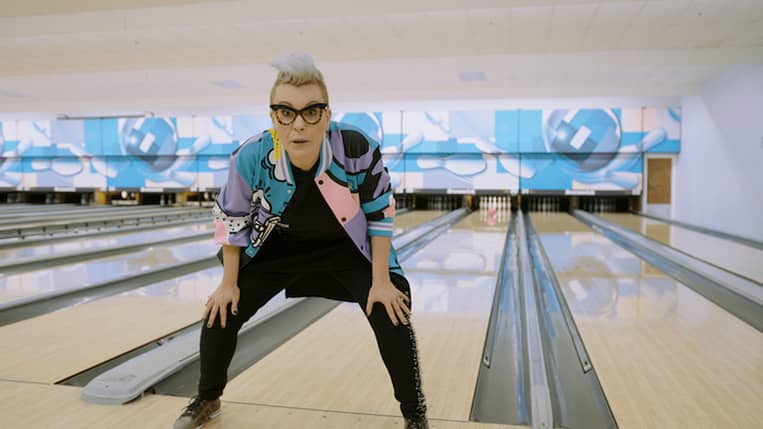 Celebrity choreographer and dancer Kristin McQuaid is hitting the road to bring unique talents to your screen. The Make a Move winner launched her own talent show, Kickin’ it with Kristin, to give hidden talents a space to shine.

McQuaid began her dance career at the age of 11 and quickly progressed with a lot of hard work and private lessons. Highly competitive, she also practiced on her own time to become one of the best in her studio and continue to grow.

“I was terrible [when I started dance], I was very very bad,” she said. “I loved it, but I was so bad, but I was very determined.”

She went on to land her first job on Days of Our Lives before appearing in the movie Beautiful with Minnie Driver. As she continued to progress in the dancing world, she performed with Britney Spears, Prince, and Cyndi Lauper, among others before turning her talents to choreography.

“I kind of felt like I was at the bottom, but reached the top,” she said. “When you don’t walk in being the top, it leads to growth. I feel like a lot of times people always want their kids to be the best, but then they don’t have anywhere to grow and to learn. So it’s really good to be the underdog and then you have somewhere to look up to.”

The once-underdog of dance eventually went on to win Make a Move. She then began to focus more on choreography, which lead her to work with Dance Moms, particularly Nia Sioux.


McQuaid is now spinning this passion for growth into her new show Kickin’ it with Kristin. The show aims to highlight talents that aren’t always showcased on the big screen while, hopefully, sparking an interest in her viewers at home.

“Age is just a number, there’s no time limit that you can’t start something new,” she said. “So the principal with Kickin’ it with Kristin is it’s never too late to start something. If you want to be an artist and you are 100 years old, then be an artist, there’s not any rules. I grew up in dance obviously, I lived at the dance studio seven hours a day and I never had time to be a cheerleader at school, or go into sports, or be in art…What if I would have taken a different path?”

Throughout the new show, McQuaid gets to try all sorts of talents she has never before explored. From horseback riding to glass blowing, she dives into new adventures while showing her appreciation for the talents of others. McQuaid said she hopes people will watch her show and realize there’s a talent or hobby out there that they haven’t yet gotten to try or didn’t want to invest money in without a guarantee they would like it.

“You have to continue to press on whether you win or you lose,” she said. “You see in some of the [Kickin’ it with Kristin] episodes where I completely fail in the beginning, I’m awful at the talent, but just in a short amount of time I end up being pretty decent.”

While some shows like America’s Got Talent and American Idol showcase a limited number and styles of talents, McQuaid hopes Kickin’ it with Kristin will shine a spotlight on talents and hobbies that are less widely known.

Kristin McQuaid: “Be Yourself in the Moment”

During season one of the series, McQuaid intentionally sought out talents from across the nation that are underrepresented or completely unknown. She also aimed to explore some new talents that she had always secretly wanted to try. The show was originally geared toward children, but she quickly learned that even adults show an interest in exploring new talents.

“There’s no age limit for Kickin’ it with Kristin,” she said. “It’s just a fun yet educational yet comedic spin on hobbies and talents. There’s so much talent in the world, but people don’t get to see it.”

Kickin’ it with Kristin was filmed during the Covid-19 pandemic as a way to explore and keep herself creative while the world around her was in chaos. As she continued to dance and choreograph, she discovered that her interests were expanding and shifting.

“Now I want to get into directing,” she said. “I feel like it’s a ladder, you kind of start at the bottom and continue your way all the way up to now creative directing and my lifelong goal would be to direct a feature film.”

This first season of Kickin it with Kristin sees the host learning to play the guitar, which is one of her lifelong dreams. While she didn’t start the episode as a pro, by the end she’s well on her way to mastering this new talent.

In a world ever more consumed with TikTok and filters, McQuaid hopes her show will encourage people to be their ever-changing selves.

“Life is too short to worry about what everyone else is doing and to follow trends, set your own trends,” she said. “Why not wear something or make something or do something that is unique and just for you and then you become the trend-setter.”