Maksim Chmerkovskiy, More Celebs Join New Show ‘Magic with the Stars’
May 16, 2021
Be the First to Comment 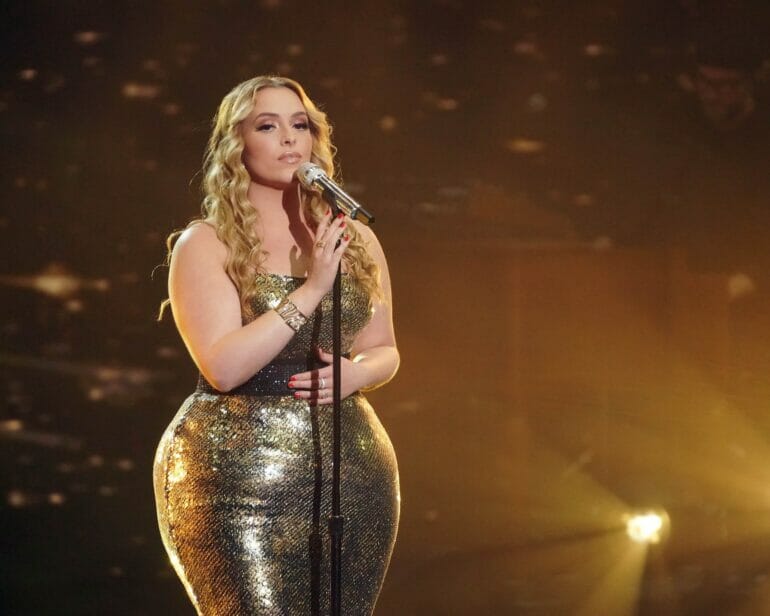 On Sunday night, American Idol Season 19 returned, as the competition was narrowed down from the Top 4 to the Top 3, ahead of next week’s season finale.

At the start of the episode, host Ryan Seacrest briefly mentioned that Caleb Kennedy wouldn’t be continuing in the competition. He didn’t give any further explanation about the controversy which led to Caleb’s departure from the show.

SEE ALSO: IT TURNS OUT BILLIE EILISH IS AN ‘AMERICAN IDOL’ SUPERFAN

During Sunday’s episode, the Top 4 performed songs by their personal idols, as well as a favorite song from earlier in the competition. They were mentored by Finneas before their performances, and also debuted their original winner’s singles.

Voting was open during the show, and one contestant was eliminated at the end of the night. The episode also featured performances from Finneas and Ashe of their song “Till Forever Falls Apart,” as well as Luke Bryan with his track “Waves.”

Contestant Grace Kinstler started the night with a performance of Kelly Clarkson’s “A Moment Like This” that had the judges raving about her talent. Grace shared that she was inspired by Clarkson, who proves that you “don’t have to look a certain way” to be successful in the music industry. Lionel Richie praised her confidence, saying young women need her to tell them that “it’s okay to be you.” Katy Perry shared that she had recently spoken to her cousins, who said they want Grace to win the show. She compared Grace to Clarkson.

SEE ALSO: QUIZ: WHICH TOP 4 ‘AMERICAN IDOL’ CONTESTANT ARE YOU?

Later in the night, Grace and Willie Spence performed a duet of “What They’ll Say About Us” by Finneas. Grace also sang her original song “Love Someone,” and reprised her performance of “Father” by Demi Lovato, dedicated to her own late father.

Willie Spence Will Save People’s Lives with His Talent

Willie took the stage to perform “Glory” by John Legend and Common, sharing that he’s “not giving up without a fight.” Mentor Finneas pointed out that Legend is a coach on The Voice, to which Willie responded, “I think I like this show better.”

After the performance, Perry said Willie “took us to church,” saying she was speechless over it. Bryan said 30 seconds wasn’t enough time to tell Willie “what that performance just did to my soul.” He told the singer that he will “save people’s lives with your voice.” Richie said he moved them “to that next place.”

Later in the night, Willie performed his original song “Never Be Alone,” and reprised his performance of “I Was Here” by Beyoncé. Richie called him “a giant of a voice and a giant of a presence,” while Perry joked that she had chills in places on her face that she believed were frozen.

Who Made It to the Top 3 Ahead of the Finale?

Live voting was open during the show, and closed during the last commercial break. Both Grace and Willie made it into the Top 3, along with Chayce Beckham. During the show, Chayce performed “Colder Weather” by Zac Brown Band, as well as his single “23” and an encore of “You Should Probably Leave” by Chris Stapleton.

Perry pointed out that Chayce’s original song “23” was No. 1 on the country iTunes chart. Later in the show, he performed a duet of “Break My Heart Again” by Finneas with fellow Top 4 contestant Casey Bishop. Unfortunately, Casey was eliminated at the end of the night.

The 16-year-old rock star won’t compete in the Season 19 finale, but you can still listen to her original single, “Love Me, Leave Me.” During the show, she also delivered performances of “Wish You Were Gay” by Finneas’ sister Billie Eilish, as well as an encore of her audition song, “Live Wire” by Mötley Crüe.

The judges praised Casey’s performances, but it wasn’t enough to take her to the finale. We’ll see Grace, Willie, and Chayce perform for their final chance to win the show next Sunday, May 23, on ABC.