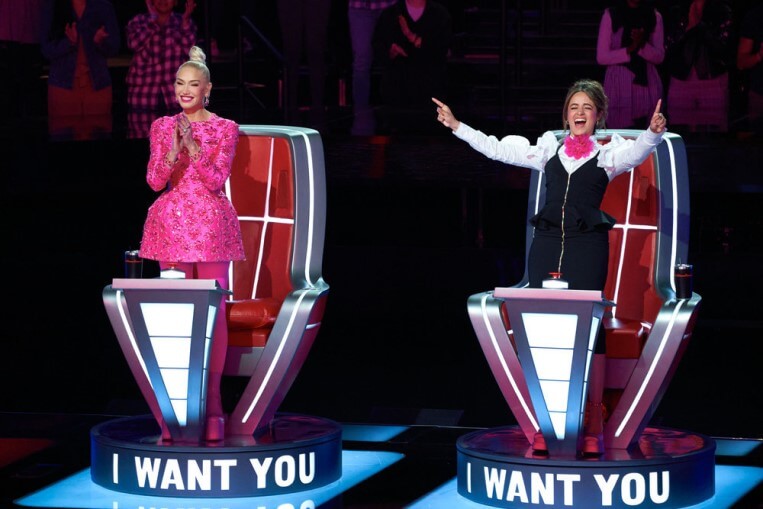 The Voice Season 22 returned on Tuesday, as the coaches started getting pickier about who they wanted on their teams. Next week marks the end of the Blind Auditions, and their teams are almost full. Tonight’s episode featured just one four-chair turn.

At the end of Tuesday’s episode, 21-year-old Grace Bello took the stage to sing “Ghost” by Justin Bieber. She turned all four chairs with the stunning performance, and the coaches proceeded to fight each other to get her on their teams.

John Legend said he liked how subtle Grace’s performance was, comparing her to his winning artist Maelyn Jarmon from Season 16. Gwen Stefani said she appreciated how many sides of her voice Grace showed, while Blake Shelton called her voice “magical.”

Camila Cabello then got on Legend’s nerves by showing off her supposed gift for Grace, which was his team jacket with her name added to read, “Camila is a LEGEND.” Grace ended up choosing to join Cabello’s team, but Legend took his jacket back before Camila could give it away.

SEE ALSO: WHY DO ‘THE VOICE’ COACHES WEAR THE SAME CLOTHES IN EVERY EPISODE?

Another noteworthy performance from Tuesday’s show came from 17-year-old Jillian Jordyn, who turned John Legend and Gwen Stefani’s chairs with her rendition of “Issues” by Julia Michaels. Stefani actually compared her to Michaels, saying she was going to text the singer and tell her about Jillian.

Jillian chose to join Team Gwen, so maybe the coach can set up a meeting at some point this season. Meanwhile, Shelton earned classic country singer Austin Montgomery on his team, and Legend automatically got Dia Malai on his team when she sang “Real Love” by Mary J. Blige.

Tuesday’s episode also featured two artists who failed to get any turns, even though the coaches expressed some regret about not pushing their buttons. It’s understandable that they’re getting pickier as the Blind Auditions wind down.

Tune in next Monday night at 8/7c on NBC to see the next episode of The Voice.