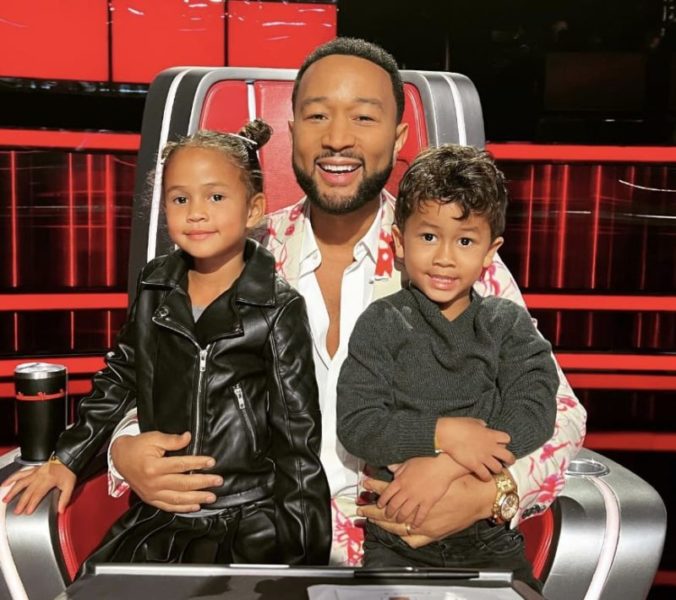 The Voice coach John Legend had some special visitors on the set of the show this week. The singer’s kids, Luna and Miles, stopped by to hang out with their dad. Legend shared a photo of the cute moment, as well as a throwback to the last time they visited.

John Legend’s Kids Visit Him at The Voice

On Monday night, during this week’s live show on The Voice, Legend shared a cute photo on Instagram featuring his 6-year-old daughter Luna and 4-year-old son Miles. The singer sits in his red coach’s chair with both kids on his lap as they all smile for the camera.

Legend’s wife Chrissy Teigen posted the same photo to her own Twitter account, adding a heart face emoji and writing, “(I’m in bed).”

Later on Monday, Legend shared a throwback photo to the last time the two kids visited him on the set of The Voice. This photo was also taken in Legend’s chair, although Luna and Miles are younger. In the shot, Luna puts her hand over her dad’s mouth. Legend wrote in the caption that it was “pre-pandemic.”

Legend and Teigen Are Currently Expecting a Baby

Teigen is currently pregnant, having announced that she and Legend were expecting another baby in August of this year. Teigen was open about her IVF journey earlier this year. The couple suffered a heartbreaking pregnancy loss in 2020 with their third child, Jack.

In September, Legend released a music video for his song “Wonder Woman,” which featured appearances from Teigen and the couple’s kids. The video, which was filmed in Italy, showed off Teigen’s growing baby bump.

Legend will not be returning to The Voice as a coach for Season 23, although he has said he plans to return to the show at some point. He shared his reasons for taking a break from the show last month.

“My family’s growing, I have a new album out, I’m going to be doing a little bit of touring, so it’s probably better that I take a break,” Legend told Entertainment Tonight, adding, “I’ll be back on The Voice, just not this coming season.”