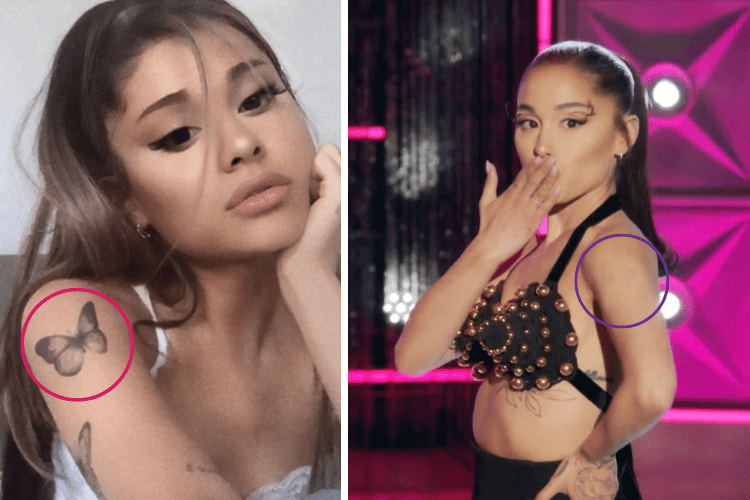 Fans of Ariana Grande were excited to tune into RuPaul’s Drag Race for their premiere, that featured the well known singer. While acting as a guest judge on the series, many noticed that Grande has a light tattoo outline on her arm. Is Grande going through laser tattoo removal?

Ariana Grande Fans Notice That Her Butterfly Tattoo is Missing

On January 7, Ariana Grande took the RuPaul’s Drag Race panel for the second time. Within the series, she was seen in an elegant pointy bra top. Since Grande showed tons of skin, fans were able to notice that one of her iconic tattoos was missing – almost. In certain moments, the outline can be seen on her arm.

It’s no secret that Grande reportedly has over 40 tattoos, dedicated to family, dogs, and more. In 2020, Grande debuted a butterfly tattoo on her upper arm at the Grammy Awards. She stunned on the red carpet in a blue Giambattista Valli dress that featured layers upon layers of ruffles. Above her elegant gloves, the singer had an extremely detailed butterfly, tattooed in black and gray realism style.

Shortly after, Grande got a second butterfly tattooed underneath the first. Fans loved this look on the singer at the time. Since both tattoos featured immense detail and shading, so many fans are wondering why she’d get rid of it.

When Did Grande Get Rid of Her Butterfly Tattoos?

Although fans mostly noticed that this identifiable tattoo was missing on RuPaul’s Drag Race, Grande apparently began covering it in 2021. In photos from Grande’s 2021 wedding, her butterflies, chihiro, and Eevee tattoos were all missing. Since then, the chihiro and Eevee have reportedly made a reappearance.

While scrolling through Grande’s Instagram feed, it’s easy to notice that her tattoo is completely hidden. There are various photos where she’s wearing a sleeved shirt, her hair is covering her arm, and more.

At this time, we’re unsure of whether Grande is going through laser tattoo removal. While this option is definitely possible, we can’t rule out the possibility of it being covered with makeup. The singer has yet to talk about her tattoo disappearing.

Get to Know Dance Town Family, The Amazing Dance Group on ‘AGT All Stars’