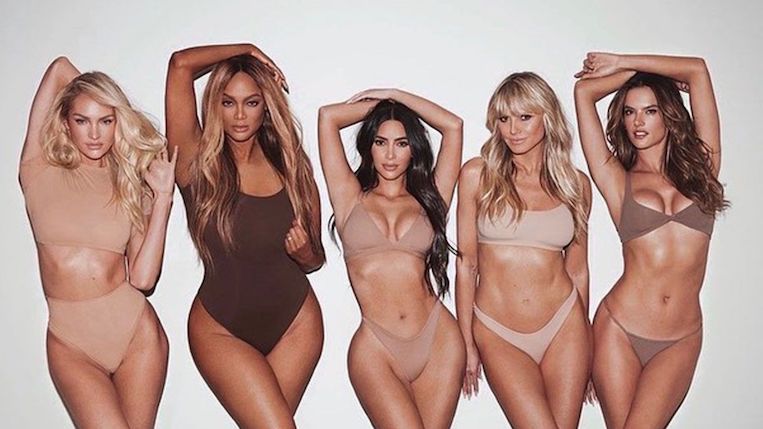 Dancing with the Stars host Tyra Banks and America’s Got Talent judge Heidi Klum posed for a photo shoot earlier this year showing off Kim Kardashian’s SKIMS line. In a recent episode of The Kardashians on Hulu, fans got a behind-the-scenes look at the shoot.

In the new episode of The Kardashians, Kim Kardashian shares her idea of putting some of her favorite lingerie models (Tyra Banks, Heidi Klum, Alessandra Ambrosio, and Candice Swanepoel) in an “Icons” campaign for her SKIMS line.

The episode features footage from the photo shoot, including the moment when Klum suggests Kardashian should model with them. As Kardashian says, “I really wasn’t planning on it, but I’m not gonna turn it down. Not next to these women.”

“I’m gonna take full credit for her taking her clothes off for this shot, okay?” Klum says to the camera as they prepare to take the photos. At one point, Kardashian’s daughter North asks why she’s wearing high heels, and she replies that she’s shorter than the other women.

The campaign debuted in April of this year, and according to The Sun, it sparked some controversy as Kardashian was accused of heavy Photoshopping.

The Instagram account Problematic Fave compared a behind-the-scenes video of the shoot with the released photo. Banks’ skin reportedly looked smoother in the photo, and her waist looked smaller.

Ironically, Banks can be seen in the new Kardasians episode praising the SKIMS brand for representing different body types, saying, “I’m celebrating this body. This is who I am today.”