Who is Miss Teddy? ‘The Masked Singer’ Prediction + Clues Decoded!

Who is Queen Cobra? ‘The Masked Singer’ Prediction + Clues Decoded!
March 31, 2022
Be the First to Comment 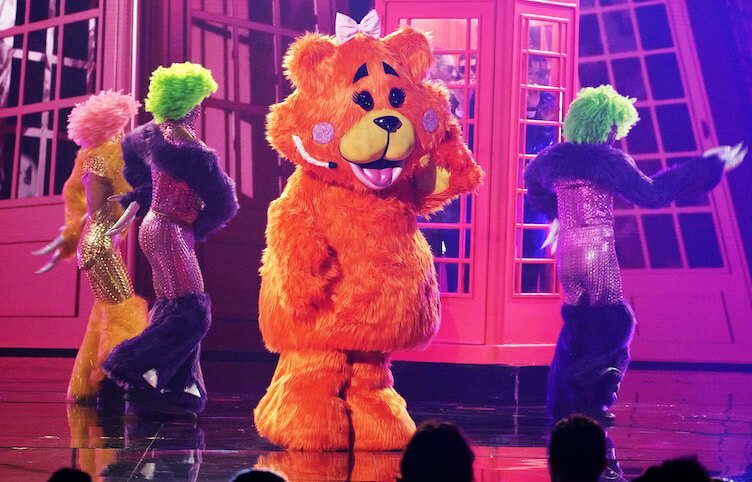 The Masked Singer introduced a whole new round of contestants this week, but none cuter than Miss Teddy. She commanded the stage with her amazing vocals, and even paid tribute to the Popcorn from a few seasons ago!

So who is the celebrity behind Miss Teddy? We’re going to go through all the clues and popular guesses to make our prediction!

Miss Teddy kicks off her clues waving to the camera and asks, “do you want to live your life on cloud nine?” Her advertisement is for the Ted Bed, which she describes as “cozy, comfy and extra cuddly, just like me!” The logo has a rainbow behind it. Then, we see a Santa figurine sitting on a cloud.

Miss Teddy says she’s “constantly reinventing” herself and that she needs “all the Z’s [she] can catch.” Two of the Men in Black are pillow fighting in white choir robes. We then see a pile of garbage on a bed, and a director’s chair with a crying laughing emoji on it. Miss Teddy says, “lay your head down in December, next thing you know, it’s May!” At the same time, we see one of the Men in Black dream about a caterpillar turning into a butterfly.

After her performance, Miss Teddy said, “I felt we all needed the biggest, warmest hug that we could all get after everything we’ve all been through.”

It’s clear that Miss Teddy has some powerhouse vocals! And the judges definitely picked up on that. Jenny thought she might be Jill Scott. Robin predicted it could be CeCe Peniston. Then, Nicole guessed Loretta Devine from the original “Dreamgirls” on Broadway.

On social media, fans are conflicted about who Miss Teddy could be. Some are suggesting Tina Turner, while others lean more toward Jennifer Holliday. Other popular guesses include Stephanie Mills, Mary J. Blige, and Gloria Gaynor.

Who is Miss Teddy on The Masked Singer?

This is another singer whose voice is so distinct it could only be one person. And lucky for us, the clues line up for her too!

So Miss Teddy has to be…

While Nicole was close with her “Dreamgirls” guess, it’s actually a different original cast member under the mask! Here are all the clues that prove it.

The bed throughout her clues package is a huge nod to Dreamgirls, which she was in the original Broadway cast of, as Effie. We also saw a rainbow and Jennifer Holliday is known for her involvement in LGTBQ events and fundraisers, like Pride. The Santa in the clues points to her last name, similar to holiday. She also mentioned “constantly reinventing herself” and that’s something Jennifer Holliday knows well. She’s done Broadway, R&B music, gospel, and appeared in many TV shows.

Another clue we saw was Men in Black pillow fighting in white choir robes, as well as a director’s chair with a crying laughing emoji on it. These clues allude to Jennifer’s role as a choir director on Ally McBeal. The pillow fight could also be a reference to her Broadway debut in Your Arms Too Short to Box with God. When she mentioned the different sides of the bed you can wake up on, that could also be hinting at her LP and video called I’m On Your Side.

Lastly, she mentioned laying down in December and next thing you know, it’s May while a caterpillar was shown transforming into a butterfly. Jennifer Holliday struggled with depression and health issues, but came out on the other side of those with a renewed perspective and career.