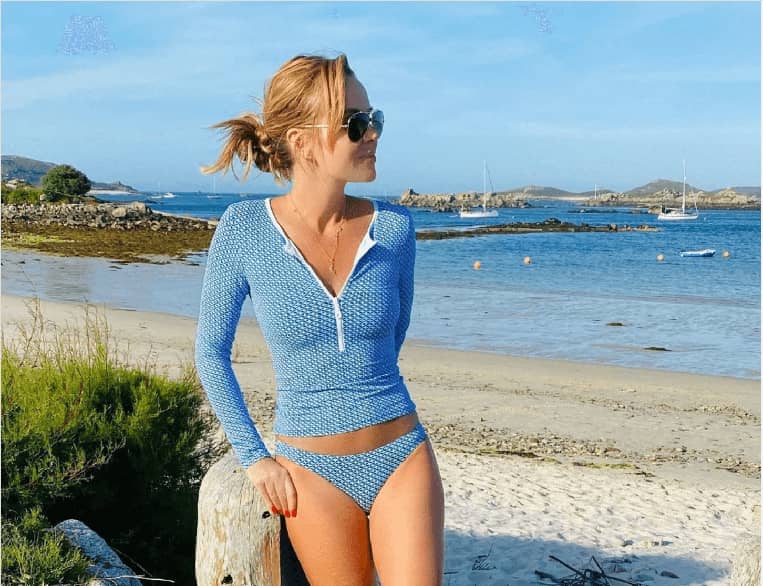 Amanda Holden literally never holds anything back. The 49-year-old ‘BGT’ judge often posts pictures showing off her stunning figure on social media. This time, a photoshoot ahead of her 50th birthday has become the internets latest meme.

In her photoshoot, Amanda wore a black crop top with matching black open-toed heels. But one thing that was missing is her pants. The mother of two wore only a pair of black underwear on the bottom which certainly caught the attention of her followers. “You’re never fully dressed without a smile…” Amanda captioned all three of the sexy photos.

“It’s ridiculous just how beautiful you are” one fan commented on Amanda’s photo. “Fair play, you look amazing! If I had a body like that I would be semi-naked too #respect” wrote another. The rest of the comments section was flooded with fire emojis and heart eyes.

SEE ALSO: ALL OF THE PROVOCATIVE OUTFITS THAT GOT AMANDA HOLDEN IN TROUBLE ON ‘BGT’

Comedic actor Leigh Francis runs an Instagram account under one of his very famous personas Keith Lemon. He posted one of Amanda’s underwear photos with a photo side by side of him posing just like her. In Keith’s photo, he opted for a pair of black boots instead of high heels like Amanda but it’s definitely just as hilarious. His look is complete with a crop top and black underwear. “You’re never fully dressed without ya trowziz. By ‘eck @noholdenback looks well doesn’t she!” he captioned the post.

Amanda got a kick out of the post and commented a laughing emoji along with some flame emojis. “This made me howl,” Amanda wrote as she reposted the image on her Instagram story. The likes on Keith’s photo keep climbing and pretty soon it will have as many likes on Instagram as the original photo that Amanda posted.

Amanda Previously Bared It All To Ring In The New Year

This isn’t the first time that the ‘BGT’ judge has posed in only her underwear. She previously said goodbye to the year 2020 in a very memorable way. Amanda enjoyed a glass of champagne poolside as she wore a pair of bikini bottoms that said “bye-bye 2020.” The post has now garnered over 173,000 likes on Instagram.

Amanda is always strutting her stuff in Instagram videos, showing off her stunning looks and making her fans go crazy. In one Instagram video, she seductively strutted down a hallway in slow motion on the set of the Heart Breakfast radio show.

One thing people on Twitter can’t stop talking about is Amanda’s incredibly toned legs. “Amanda Holden is so damn beautiful, and those legs are to die for” one person wrote on Twitter.

SEE ALSO: AMANDA HOLDEN TAKES IT ALL OFF TO WISH 2020 GOODBYE [PHOTOS]

Another thing for certain is that Amanda literally refuses to age even with her birthday coming up on February 16. Be on the lookout for more sexy photos posted on her Instagram account in the future.