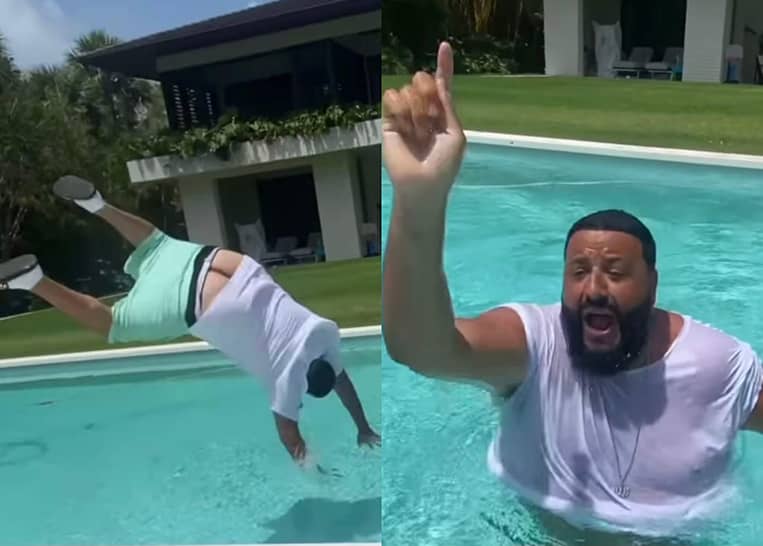 Nobody was more excited about Cardi B’s feature on DJ Khaled’s new album than…well…DJ Khaled himself! He got so excited about the last-minute collaboration that he decided to jump into the pool, losing his pants in the process. He certainly put on a show for his fans and made us miss his exuberant personality on The Four.

The collaboration that he was probably the most excited about was the one that came to fruition just hours before the album’s official release. “Big Paper” with Cardi was literally added to the tracklist in the blink of an eye. Khaled was so excited when he found out Cardi’s vocals were sent in that he ran across his yard screaming “Cardi B vocals is in!”

The 45-year-old jumped into the pool and mooned the camera in the process. His 23.9 million Instagram followers got to see a perfect shot of his bare butt staring straight at them. Soon after, Cardi posted a video listening to the song on her Instagram story. She also thanked her fans for making her the number two trending topic on Twitter for this collab.

Khaled also posted a hilarious video of Cardi’s head on Michael Jordan’s body when the Chicago Bulls won their sixth NBA championship. The former judge on The Four called Cardi’s addition to the album a “buzzer-beater.”

She posted a video about writing her verse for the song 48 hours before the album’s release. The mom of 2-year-old daughter Kulture with husband Offset said that she didn’t even think she was going to make the record on time. In an attempt to make sure her enunciation on the track was perfect, she really cut it down to the wire with time.

Khaled got the song in the morning and immediately had it mastered before updating the tracklist of the album. Offset, part of the group Migos, took Cardi out for a nice dinner as they both marveled at the albums success.

Khaled Khaled quickly became the number one album on Apple Music shortly after its release. Khaled is always absolutely hilarious on Instagram and his album is full of nothing but incredible hits.

The song “SORRY NOT SORRY” with Jay-Z and Nas will absolutely become your new favorite song heading into the summer. Take a listen and let us know what you think in the comments below.