‘The Masked Singer’ Winner Amber Riley Looks Back on Her Journey on The Show
October 10, 2022
Be the First to Comment 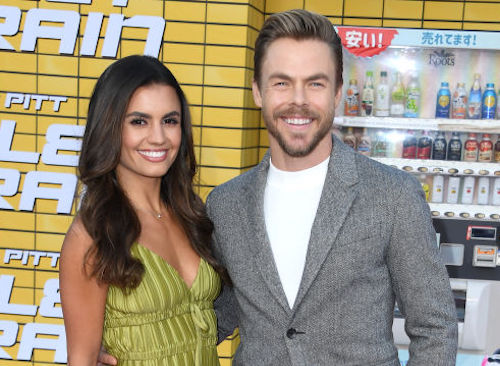 Dancing With The Stars judge Derek Hough reveals new details about his upcoming wedding to fiancée Hayley Erbert. The couple has been engaged since June after seven years of dating. Hough shares some of their wedding plans prior to tying the knot with his longtime love.

Hough Wants a Dance Performance On The Wedding Day

During his guest appearance on The Jennifer Hudson Show, Hough was asked by the host about his upcoming wedding. The couple are looking to get married within the year and his guest list will include 160 people.

For the couple’s wedding, fans are expecting their first dance together to be quite the spectacle. However, Hough admitted that he initially didn’t want to have the pressure of having to perform on the wedding. Instead, he wanted other people to perform for him and his fiancé, planning on “booking talent,” for their reception.

They’re planning for it to become a very entertaining wedding inviting friends that are good musicians and performers. After thinking about it for a few months, Hough realized that there “might be an expectation,” for them to perform. Based on how the DWTS professional dancers have performed in the show, their dance together will surely be beautiful.

Hough and Erbert first met in 2014 when Erbert was hired as a professional dancer to go on tour with the Hough siblings. She joined season 21 of DWTS in 2015 and subsequently began her relationship with Hough in the same year. Earlier this year, the couple got engaged in their California home.

Hough is Set To Perform On This Season of DWTS

A DWTS season cannot be considered complete without a performance from the three-time Emmy Award winner. In honor of his close friend Michael Bublé, Hough will perform on the Bublé themed night of the show.

Hough said to Bublé, “Dude, would you want to come on the show? We should do a Michael Bublé Night. It would all be about your music. He was like, ‘I’d be up for that.” Michael Bublé night will take place on Monday, October 24 and the guest judge on the show will be the singer himself.

Hough is also booking Bublé to perform on his wedding, even joking that the wedding will take place depending on the singer’s schedule. He holds high respect for his friend Bublé, that he is set on making him perform on his and his fiancé’s special day.

The upcoming wedding is now star-studded and will be an event full of love, happiness, and unforgettable dance performances.