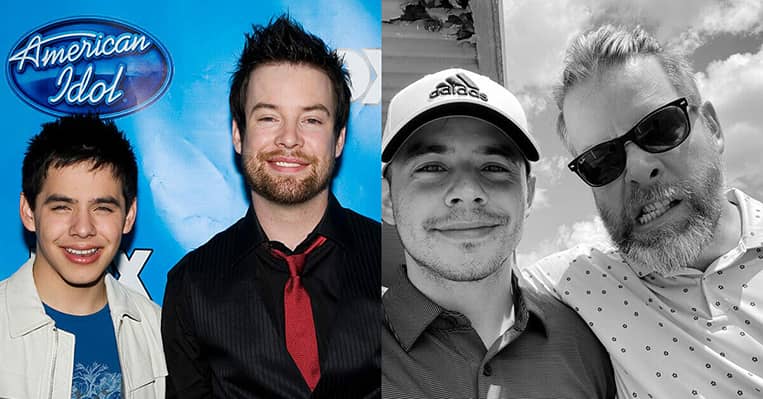 Two American Idol stars recently reunited, and we’re so happy to see them together again. Season 7 winner David Cook hung out with runner-up David Archuleta, and he posted a great photo of the two of them on Twitter.

Cook won the show in 2008, and he has released several albums and EPs since then. Archuleta was just 17 when he came in second place on the same season. He recently came out as a member of the LGBTQ community.

“This happened today,” Cook wrote to accompany a black and white photo of him and Archuleta posing for the camera as Cook makes a silly face. “So fun to catch up, @davidarchie!”

Based on a video Archuleta posted on TikTok and Twitter, it looks like the pair might have spent some time golfing. In the funny clip, Archuleta walks toward Cook holding an American Idol trading card with the winner’s picture on it, saying he bought it on eBay. Cook puts his hands on his hips and shakes his head over it.

Fans were excited to see the former competitors hanging out after thirteen years. As one Twitter user wrote, “This pic makes me feel like I’m in high school again! David squared friends after all these years.”

What Have the Davids Been Up to Since The Show?

Cook is now 38 years old. He released a self-titled album in 2008 after his American Idol win, and he has gone on two record three more studio albums since then. He also has two EPs, including The Looking Glass, which he released earlier this year.

Archuleta, meanwhile, is 30. He’s put out eight studio albums, including two Christmas albums. Recently, Archuleta shared that he’s a member of the LGBTQ community. He came out as gay to his family in 2014, but later realized he had “similar feelings for both genders.” He also shared that he doesn’t have “too much sexual desires and urges as most people.”

We love it when American Idol winners and runners-up get along in real life. Other examples include Kelly Clarkson and Justin Guarini, Ruben Studdard and Clay Aiken, and this year’s contestants Chayce Beckham and Willie Spence.