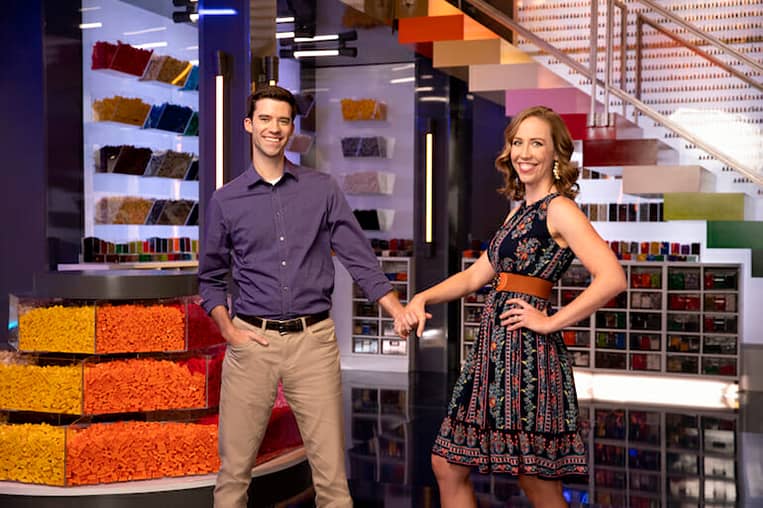 LEGO Masters recently finished up its second season on FOX, but what have the first season’s winners been up to since they received the trophy? Married couple Tyler and Amy Clites were named the first winners of the show in 2020, where are they now?

According to Tyler’s website, he’s been building with LEGOs since he was 2 years old. In 2019, the show apparently reached out to him and his wife Amy about joining the show as one of ten teams competing for the trophy. They beat out all the other teams to win the LEGO Trophy and the $100,000 prize.

Tyler and Amy’s final, winning build was called “Treasure of the Griffin.” It depicted a moving griffin protecting its nest from an attacking lizard at the top of a tower. Amy explained that it represented parental love and protection.

One notable thing about Tyler and Amy’s time on the show is that Amy found out she was pregnant while they were filming. She surprised her husband with the news on camera during an interview. That moment didn’t end up being aired, with viewers instead seeing the couple tell host Will Arnett the news.

“I found out just a couple weeks into filming, and I actually told the producers that I was pregnant before I told Tyler!” Amy later explained. “Because I was hoping maybe we could get his reaction on film and be able to share it with our baby one day. They were all for that idea. I was able to surprise him in an interview.”

SEE ALSO: THE WINNER OF ‘LEGO MASTERS’ SEASON TWO, AS CLEAR AS NIGHT AND DAY Tyler and Amy Are Now Parents to a Baby Boy

Amy Clites gave birth to the couple’s son on his due date, July 10, 2020. They named him Timothy Lael Clites. Tyler shared a photo of Timothy on Instagram not long after he was born, writing, “Our little LEGO master is a real stud!” He added, “We are incredibly thankful to God for this wonderful gift and blessing!”

Timothy turned a year old this past July. Tyler shared an updated photo when he was 9 months old. In the cute pic, Timothy can be seen sitting on the floor playing with LEGOs. When a commenter expressed concern about a baby so young playing with smaller bricks, Tyler replied by saying that he was “heavily supervised,” adding that he mostly plays with Duplo bricks, which are made for younger children.

Meanwhile, Tyler was hired as the Creative Director for BuildBetterBricks.com in 2017. According to his website, he’s “the company head for model design, instruction design and layout, product photography/videography, and graphic design.”

In an interview earlier this year, Tyler shared that the family was able to buy a house using the money they won. He added that the biggest change to their lives was being recognized in public for being on the show.