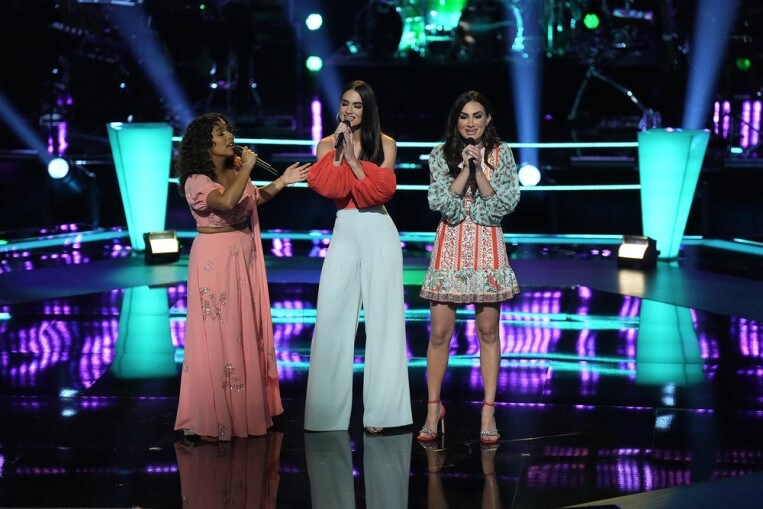 The Voice Season 22 returned on Tuesday night with another round of Battles. This episode showcased a few seriously talented teen singers who won their respective Battles and will continue in the competition. The night also ended with a save from coach John Legend.

During Tuesday’s show, Blake Shelton paired up his artists Benny Weag and Brayden Lape on a cover of “Pretty Heart” by Parker McCollum. Brayden is 15 years old, while Benny is 29. You might think that it was an unfair matchup, but Brayden proved himself, and Shelton chose him as the winner.

Later in the night, 17-year-old Parijita Bastola (who turned four chairs with her audition) went up against sister duo The Marilynds on Team Legend. They sang “How Deep Is Your Love” by the Bee Gees. It can sometimes be daunting for solo artists to hold their own against groups, but Parijita nailed it. Legend chose her as the winner.

Tuesday’s episode also featured a few shortened Battles in a montage. That includes Daysia versus Julia Aslanli on Gwen Stefani’s team. The duo sang Michael Bublé’s “Home,” inspiring Stefani to keep 17-year-old Daysia on her team. The coach said she was impressed by Daysia’s growth.

SEE ALSO: TOP 6 MOST POPULAR ‘THE VOICE’ SINGERS OF ALL TIME

The coaches have been using up their saves and steals this season, and on Tuesday night, Legend used his steal to keep sister duo The Marilynds on his team, saying they have “something special to offer this competition.” They’re one of two duos who made it through the Blind Auditions. The other, married couple The Dryes on Team Blake, has yet to perform in the Battles.

Tuesday’s episode also featured an amazing Battle between Team Camila’s Eric Who and Sydney Kronmiller, who sang “Paparazzi” by Lady Gaga. Stefani called it “so weird,” in a good way. Cabello chose to keep Eric on her team, meaning Syndey was unfortunately eliminated.

The Voice Season 22 will return with more Battles next Monday night at 8/7c on NBC. Which coach has the strongest team at this point in the competition? Let us know what you think in the comments below.