Watch Drea Dury’s Unexpected Bilingual Version of ‘Rude Boy’ on ‘The Voice France’
February 18, 2021
Be the First to Comment 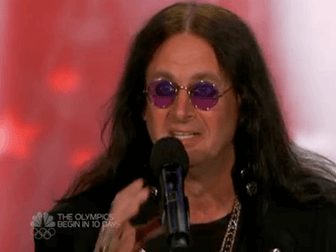 Sharon Osbourne almost falls out of her chair when she thinks her husband steps on the stage. Instead, it was a very talented Ozzy Osbourne impersonator. The comedian talks, sings and dresses like Ozzy. Watch the hilarious moment below!

Ozzy Osbourne Impersonator Has Everyone Shook

Randy Hanson is a 47-year-old Carpenter who in his free time enjoys impersonating Ozzy. He leaves Sharon and the rest of the judges speechless on AGT. Walking out on the stage with long black hair, purple glasses, and an all-black ensemble. He doesn’t break character and talks in the same mumbled way Ozzy does.

When David Hasselhoff asks him how long he has been doing impressions he tells him, “well everyone says I look like Ozzy, and wait what was the question?” he jokes. David tells him that Sharon will be the judge of whether or not he pulls off the impression. Randy decides to sing “Paranoid” by Black Sabbath, the group Ozzy was a part of.

The crowd and the judges go crazy when they hear him singing, even though he doesn’t have Ozzy Osbourne’s singing voice. The impersonator kills the audition and shocks Shannon. “I have to just say this, could you take your trousers down so I could check your not my husband.” she jokes. All three judges fall in love with him and give him three yeses.

Following the audition, he did not make it past the next round and did not go as far in the competition as people had hoped. If you enjoyed the funny audition, watch our Top 10 funniest auditions on AGT below!

Why Did Sharon Quit The Show?

The famous judge did not last too long on America’s Got Talent‘s judging panel, in 2012 she abruptly decided to leave the show. Sharon later revealed that she left because her son was to participate in Stars Earn Stripes. In that show, celebrities compete in military-type exercises but her son got diagnosed with multiple sclerosis so they cut ties with him.

“I just can’t be fake,” Osbourne told the Post. “It’s discrimination, and it was badly handled.” The producer for the show say that they never formally hired him and that the exercises would have been too intense for him. Sharon never responded to their response.