Kelly Clarkson Will Replace Simon Cowell On ‘America’s Got Talent’—Will It Be Permanent? 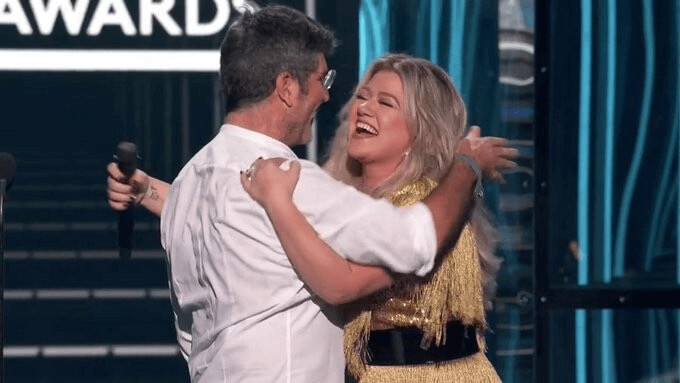 After Simon Cowell went through a six-hour back surgery to repair the damage done from falling off an electronic bike, we finally have some answers about what will happen on America’s Got Talent. Now, we finally have learned that Kelly Clarkson will be stepping in for Simon while he recovers. Check out all the details below.

According to TVLine, Kelly is set to be a judge this week for the first two live shows. On Tuesday, Kelly will judge the first group of acts as they perform individually. On Wednesday she will also be present as the results are delivered and the judges must save one act at the end of the episode. The desk of Kelly Clarkson put out a statement saying “My friend, Simon Cowell, is doing better now but was in an accident and won’t be able to make Tuesday and Wednesday’s live shows for AGT. But no worries America, someone far wiser, cooler, and hotter is taking his seat! The unbelievably amazing Kelly Clarkson. You’re welcome in advance!”

SEE ALSO: WHAT DOES SIMON COWELL’S ACCIDENT MEAN FOR ‘BRITAIN’S GOT TALENT?’

News of Simon’s injury first made waves on Saturday after he fell off of a new electric bike in the courtyard of his Malibu home. He was rushed to the hospital where he underwent successful surgery. At first, it was up in the air about the severity of Simon’s injury. A metal rod was put into his back as he suffered three separate breaks according to The Sun. He then posted a statement on social media saying “Some good advice, if you buy an electric trail bike, read the manual before you ride it for the first time.” The statement continued saying “Thank you to everyone for your kind messages. And a massive thank you to all the nurses and doctors. Some of the nicest people I have ever met.”

Simon also was reportedly in good spirits before his surgery, even getting to see girlfriend Lauren Silverman beforehand and use his iPad.

How Long Will Simon’s Recovery Take?

The caliber of injury that Simon has can take anywhere from eight to 10 weeks to recover. This makes a sticky situation when it comes to the America’s Got Talent live shows but knowing the producers, Simon may make a small appearance virtually just like Heidi Klum did when she was sick at the beginning of the season. So far, Kelly has only announced she would be involved in the first week of live shows and nothing further. But there could be a possibility she could sign on for longer should Simon need more time to recover off camera. We originally suspected Simon would be involved in the show either virtually or in-person in a wheelchair at some point in the season.

Simon helped launch Kelly’s career after she appeared on season one of American Idol. She was his favorite from the start and he continuously gave her good advice each week to help her elevate her performances. Kelly went on to win the show and become an extremely successful artist and talk show host. She also already has experience being on a reality talent competition as she is also a coach on The Voice. Kelly is a great choice to replace Simon for the time being.

SEE ALSO: SIMON COWELL FINALLY AWAKE AFTER HIS 6-HOUR SURGERY AND HAD THIS TO SAY…

We absolutely cannot wait to see Kelly take on America’s Got Talent and of course, we send well wishes to Simon and hope for a speedy recovery.