Blake Shelton is Taking His ‘The Voice’ Red Chair After Retiring, “They Owe Me The D*mn Chair”
January 13, 2023
Be the First to Comment 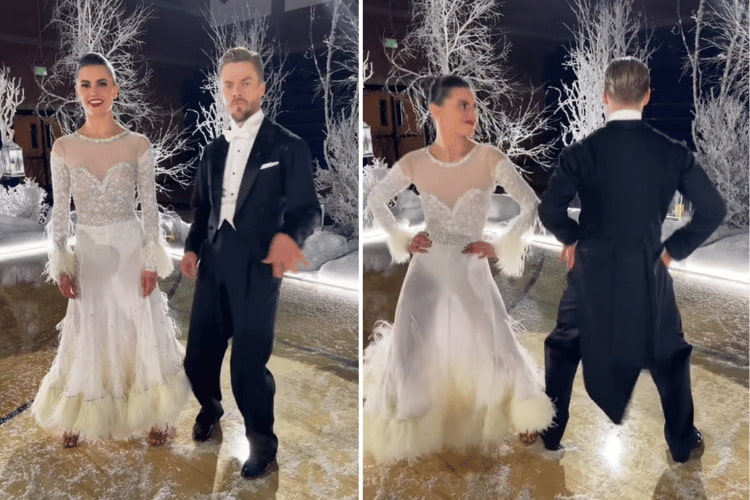 Dancing With The Stars troupe member Hayley Erbert’s latest Instagram post showing her and Derek Hough’s “First Dance,” causes mass confusion among their fans. The video was intended to be a funny clip with the couple having fun dancing together while wearing their best clothes.

After Hayley Erbert and DWTS judge Derek Hough published an Instagram video of their “first dance,” while dressed in wedding clothes, several fans were left with many questions. The post left fans confused about whether the couple already had the wedding ceremony and secretly tied the knot together.

Comments such as “Am I missing something? Did they have their ceremony?” and “Exactly inquiring minds here!!” can be seen in the comments section of the post. Both Erbert and Hough tried their best to tell the fans the truth about their current wedding status with each of their replies.

The couple quickly clarified and assured the fans that the wedding didn’t happen yet. The couple said that the video was for a recent project they shot together. Hough revealed the plans for their actual first dance in an appearance on The Jennifer Hudson Show in September 2022. The portion of the dance Erbert showed looked like they were just having fun.

They Haven’t Found a Venue for Their Wedding Yet

Hough said in the post’s comment section that he and Erbert are still in the planning stages of their wedding. They currently do not have a first dance choreographed and practiced as of yet. Additionally, they also haven’t picked a venue for the ceremony as of yet and that they’re open for any suggestions.

The couple have not revealed the date of their wedding to their followers, but they have revealed some information. In an interview back in October 2022, Hough said that he and his fiance will dance together during the wedding. They planned the wedding to take place within the following year.

The couple confirmed their engagement in an Instagram post on June 2, 2022, after going public with their love in 2017. They have two dogs and two cats together. At the moment, they are currently taking their time working on projects like Schoolhouse Rock while being engaged.